Thai people are invited to participate in a three-day celebration ordered by His Majesty the King for the Songkran Festival, starting this Friday, at Royal Plaza and Sanam Sue Pa compound.

The event, from 2pm until 9pm, is called Maha Songkran, Tamnan Thai and will be held to express gratitude to former monarchs as well as celebrate the culture and traditions of the country.

This Friday, the Supreme Patriarch will preside over a religious ceremony to make merit for Her Majesty Queen Sirikit, wife of HM the late King Bhumibol Adulyadej.

The monarch has also ordered that the statue known as the Prachai Langchang will be brought to the ceremony as the presiding Buddha statue. This statue belonged to HM King Rama I, who took it with him to every battle, and was believed to help him win.

The King’s view is that the public should have the opportunity to worship the Buddha statue for their personal blessings and the blessing of the country during Songkran.

Prayer books will be published and distributed to participants in the ceremony.

People will also have the opportunity to pay their respects to, and pour water on, the Phra Buddha Kamnerd Kasawapat statue. This Buddha statue was built when the King entered the monkhood on November 6.

The venues will feature exhibitions on the history of Songkran and the country’s culture and traditions, and souvenirs and other goods will be on sale.

Thai people are encouraged to wear traditional costumes and dress modestly. Water guns and powdering others will not be allowed. 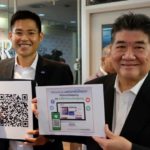