Home » Is that Jokowi?: Rice sack model mistaken for President

Rice Sack Model: A picture of an Agriculture Ministry-issued rice sack has gone viral as netizens have mistaken the model pictured on the sack for President Joko “Jokowi” Widodo.

Twitter user @Jokoedy6 posted pictures of the rice sacks, claiming that the man shown carrying a bundle of rice stalks was in fact Jokowi and accused the President of unfairly promoting himself.

“The Agriculture Ministry’s rice has Jokowi as its logo,” he tweeted on Tuesday. “If he doesn’t break the rules, Jokowi cannot win. To win, he needs to cheat and act corruptly.” As of the time of writing, the post had been retweeted 425 times and liked 527 times.

Several other netizens chimed in to criticize what they perceived as Jokowi’s misuse of government facilities.

“So, all this time rice imports have been used to fulfill the free sembako [the nine basic commodities] stock and produce rice with special packaging for self-promotion,” Twitter user @BaktiSuci said on Wednesday. 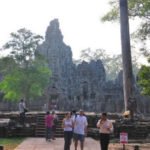