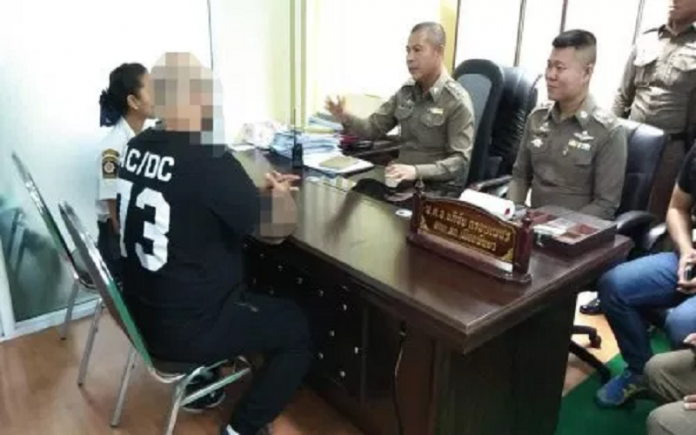 The Iranian businessman charged with handcuffing and raping his ex girlfriend then shaving her head has denied everything after being interviewed by Pattaya police yesterday.

Earlier “Neung”, 21, from Prajinburi, had gone to the cops to claim that she was forced onto a motorbike after the couple met in Walking Street in the early hours of the morning. She said she was taken to a Jomtien condo where she was handcuffed, had her mouth covered in duct tape and was raped twice before having her head shaved.

She said that the couple had been together for a year but had split up two weeks ago and the Iranian couldn’t stand the break-up.
Yesterday Pattaya’s two top cops – chief Pol Col Apichai Krobpetch and tourist police chief Lt Col Piyapong Ensarn – interviewed Mohsen Sarafrachi aged 39.

The case has now turned on its head as the Iranian – reported as having interests in condo rental and car hire at the resort – has denied everything.
He agreed that the couple had been together for a year and had split up two weeks ago. This was because he has a new woman.

However, he claimed that when he met his ex in Walking Street she asked to come back to his condo in Jomtien. There they ended up having consensual sex together two times before she left.

She then shaved her own head, he said. There were no cuffs and no duct tape.

He could only assume that she was jealous and trying to get back at him for having a new love interest.

Police said they are determined to seek justice in the matter and are studying CCTV and looking at doctors’ reports carried out on the woman.

The Iranian has been charged with rape and imprisoning a person against her will.