Home » Hunt on for 3 men pretending to be drug cops

Hunt on for 3 men pretending to be drug cops

Police are hunting three Thai men who claimed to be narcotic suppression officers, raided a Bangkok garage and “arrested” a 26-year-old over drug allegations, but then fled when the man’s relatives showed up.

“Police investigators are checking the suspects’ vehicles that were caught on a video clip and contacting the Narcotic Suppression Bureau to identify the men,” Tharakorn said.

The men, who were each armed with a gun, raided the shop and handcuffed Nuttapong Jitsaguan over alleged drug and money-laundering charges, which Nuttapong denied. The incident was captured by the shop’s hidden security camera.

Nuttapong posted the clip and some still photos on Facebook on Wednesday and received 16,000 reactions, while the video had been shared by 22,712 people as of Thursday afternoon.

Nuttapong also went to the Sai Mai precinct on Thursday to provide additional information and confirmed that the men in the video were the ones who had detained him.

In his Facebook post, Nuttapong claimed the men had said they had arrest warrants for him and his girlfriend for drugs and money laundering, but did not allow him to read the warrants.

They took him upstairs to the residential area to search for guns and drugs before searching another house, he said.

After his girlfriend and younger brother showed up, the men threatened to take them to a “safe house”, then removed the handcuffs and fled when Nuttapong’s father showed up and told them he was an officer in the Royal Thai Air Force.

Nuttapong said the men had told him to close the shop for a month and flee the area because a team of commandos would search it for drugs, but he told them he would remain open because he had not done anything wrong.

Meanwhile, Office of the Narcotics Control Board (ONCB) deputy chief Chalaisin Phocharoen said the men were not from his agency, adding that ONCB officers have to follow set procedures when conducting search operations.

Those include officers presenting and reading out a search warrant whenever possible and lead officers were also required to present their badges, while search reports had to be filed with the ONCB chief within 15 days.

Chalaisin added that people with suspicions about ONCB imposters can always call the agency’s 24/7 hotline, 1386.

Illegal detention is punishable by up to three years in jail, a Bt6,000 fine or both. 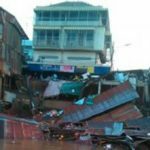