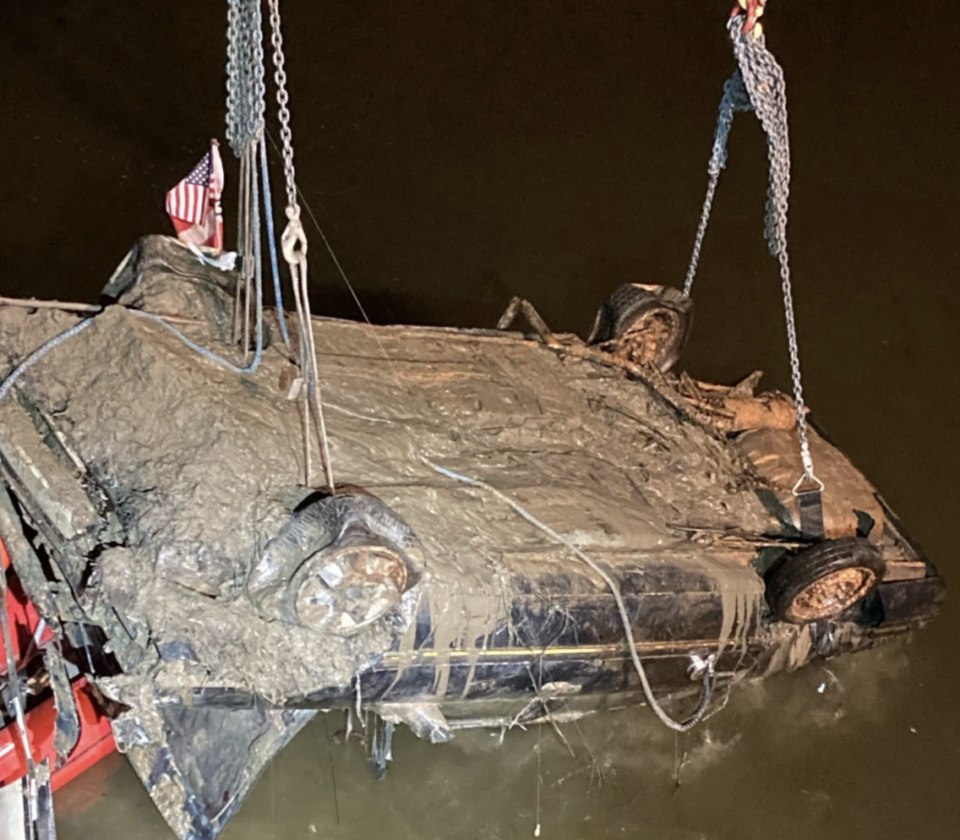 A CRACK team of scuba-diving sleuths has solved a staggering seven cold cases in just two months, bringing much-needed closure to heartbroken families who had been left without answers for years.

The group, known as Chaos Divers, operates out of Southern Illinois and is comprised of divers Jacob Grubbs and Eric Bussick, and head of logistics Lindsey Bussick.

Between October and December of last year, the trio managed to solve seven missing persons cases in a number of different states, including in Illinois, Oregon, Kentucky, and Texas.

Their most recent discovery came on December 5 when the group found the remains of Jeff Anthony Shepherd in a pickup truck submerged in Strunk, KY, pond.

Shepherd had been missing for more than three years, having last been seen leaving a bar in Winfield on March 18, 2018. He had called his mother letting her know he was on his way home but never made it back.

In an exclusive interview with The Sun, Jacob Grubbs, 33, revealed that he, Eric, and Lindsey never anticipated becoming independent cold case investigators but were inspired to do so following a chance discovery made by a friend in 2019.

Jacob, a keen fisherman, started scuba diving a few years ago so he could help to clean trash out of river systems, lakes, and local swimming holes.

While doing so, the former coal miner said he started finding all kinds of items – from discarded iPhones to lost wallets – and decided to set up a YouTube page to document his interesting discoveries.

“I used to watch a lot of videos about it on Youtube and I honestly thought they were fake until I started doing it, and then I was like, ‘wow!’,” Jacob told The Sun.

He quickly amassed a large social media following on YouTube and befriended a number of other divers uploading similar videos to him.

One of those divers was Jared Leisek, who runs the YouTube page Adventures with Purpose.

Leisek made headlines in December 2019 when he happened across a car with a body inside during a dive in Oregon and ended up accidentally solving a cold case single-handedly.

Jacob drove up to St. Louis to assist Leisek with the dive where they recovered the body of Nathan Ashby from the Missouri River.

After the incredible discovery was made, Jacob said he felt “compelled” to continue investigating cold cases in the Southern Illinois area.

Families searching for missing loved ones then started reaching out to him directly, and he decided to take the venture up as his full-time job.

“In the last two months, we’ve brought seven people home by ourselves,” Jacob told The Sun in late December.

And during a road trip with Adventures With Purpose and other groups in the fall, Chaos Divers helped to solve a further 16 cases in 45 days.

“I’m still in awe of being able to help so many families in such a short time,” he said.

“It’s been an amazing feeling, particularly when we were able to solve a case after 23 years in October.”

During their road trip with Adventures With Purpose (AWP) back in October, Chaos Divers helped to solve the disappearance of 20-year-old Samantha Jean Hopper, who vanished with her one-year-old daughter Courtney Esther Danielle Holt on the night of September 11, 1998.

According to police, Hopper, who was eight months pregnant at the time, had plans to drop off her daughter with a family member before heading to a concert in Little Rock in her blue Ford Tempo.

However, she never made it to either location, and neither Hopper nor Courtney was seen ever alive again.

Hopper also left behind another daughter, Dezarea Carpenter, who is now an adult and lives in Florida.

Chaos Divers and AWP met with Dezarea, along with Hopper’s mother and best friend to learn more about her and her last known whereabouts.

Working from clues about Samantha’s habits and the events of that day in 1998, the two dive teams split up to scan multiple locations in the area of Lake Dardanelle.

Divers with AWP took a route along Mill Creek, while Jacob and the rest of Chaos Divers searched the Illinois Bayou near Pleasant View Road.

Around an hour into the search, Chaos Divers made a discovery in the Illinois Bayou after picking up images of a small, overturned car eight feet below the surface of the water on a sonar scanner.

After entering the water, Choas Divers matched the vehicle to Hopper’s blue Tempo. Human remains were also found inside.

Hooper’s family members were present at the scene when the car was lifted from the water.

Weeks later, investigators with the Arkansas State Crime Lab in Little Rock positively identified the remains as Hopper and Courtney’s.

Jacob described the discovery as a bittersweet gut-punch.

“That one hit me hard,” Jacob said. “But I was glad to be able to bring her other daughter answers as to where her mother and sister had been for the last 23 years.

“I am super proud of the team and myself for being able to do that.”

Lindsey Bussick is in charge of determining which cases Chaos Divers are able to investigate and those they aren’t.

Family members and friends of missing people regularly reach out to the group seeking their help to find a long-lost loved one.

Police departments across the country that otherwise lack the technological resources to conduct such searches also sometimes request their expertise, she said.

“From there, we kind of map out their last known movements and identify any waterways they may have passed before vanishing.

“If there aren’t any waterways then we can’t help,” she continued. “Everything we do is based off water. Also, if there isn’t a vehicle involved we also can’t help, because our sonar is set up to see cars or other vehicles beneath the water.”

While the group takes on as many cases as they can, going out on the road almost every week, Lindsay said the work doesn’t come without its emotional challenges.

Such challenges often arise in the wake of solving a case, Lindsay said, where the team’s initial elation is almost immediately displaced by feelings of sadness for the subject’s family.

“It is a heartbreaking moment to have to look someone in the eye and say, ‘We’ve found them. They are gone,'” she said.

“But at the same time as these tears are rolling down their face you’re watching this weight be lifted off of them, because for the first time and however many months, years, or decades, they know where their loved one is and they don’t have to wonder anymore, they don’t have to worry.

“So it’s heartbreaking, but it’s heartwarming at the same time; it’s very surreal because you just gave them the worst news but at the same time, they’re just so grateful that somebody did something for them.”

Lindsey described the feeling of closing a case as a bittersweet “gut-wrenching sensation that you never want to give up.”

“Quite often with these cases, the time that has passed without answers allows rumors to fly, and before you know it, people are offering up theories of a murder or drug deal gone wrong.

“But then in actuality, it was an accident. And now the family has answers, they have closure. They finally know where their loved one is, and so we help put those rumors to rest.”

Another family Chaos Divers helped to provide answers were relatives of Brian Goff and Joni Davis, who they found in the Ohio Valley in November 2021, three years after the couple vanished.

The group originally arrived in the region to search in the Hancock County area of the Ohio River for Karen Adams, who was last seen at a nearby casino on March 11, 2007.

They searched three different locations across three consecutive days for Karen but came up empty-handed.

While in the area, they got a tip from another diver group about the case of Goff and Davis, who pointed them to a body of water in Jefferson County that had not yet been searched.

“They told us there was one spot that kind of bothered them about the case, which was around a mile south of where Brian’s cellphone last pinged.

At aged 35, Joni suffered a huge seizure in her sleep and was hospitalized in a coma for several months. While she eventually re-learned how to walk, speak and feed herself, Joni was left permanently brain damaged and required full-time care.

“They were extremely meticulous in their daily routine: they ate at the same places on the same days, went to the same gas station to fill up their tank – everything was laid out and organized for them, kind of like OCD,” Jacob said.

“So when they went missing, almost instantly alarm bells started going off for everyone who knew them.”

Brian’s car was last sighted by a gas station surveillance camera heading north in Belmont County, not long after the couple had dined at a local Pizza Hut – as they always did on Sundays.

The last ping from Goff’s cellphone was in neighboring Jefferson County. After that, all traces of the couple ceased.

Chaos Divers retraced the couple’s steps in the early morning hours of November 11. They were driving past Rushman Road, near where the couple’s phone last registered, which runs adjacent to the Ohio River.

“We were driving that path when we noticed this one spot, an opening by the water that didn’t have a guardrail in front of it, nor any weeds or reeds or anything like that,” Jacob said.

“There was just this one little tree there, and for some reason that stood out in my mind. It was almost like a light was shining down on it.”

Jacob put on his dive gear and entered the water at 3am. Within minutes, he’d found a light blue Oldsmobile 88 in a shallow portion of the river.

The license plate of the car matched one registered to Brian.

Inside the vehicle, police later found two sets of human remains strapped into the front seats. They were confirmed to belong to Brian and Joni.

While it remains unclear whether the couple entered the river accidentally or intentionally, Jacob and Lindsay say their relatives were just grateful to know where they were.

“There were lots of hugs and tears,” she added. “They just wanted us to know how appreciative we were that we were able to bring them home.”

Choas Divers say they intend to continue working year-round to help solve other cold cases in and around Illinois.

As they did last fall, they intend to set out on the road later this year with Adventures with Purpose to solve more cases in quick succession.

The team do not charge families for their recovery efforts and fund their trips entirely from revenue generated from the social media pages, independent donations, and merchandise sales on their website. 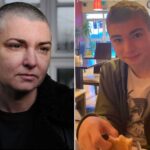 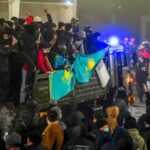 At least 164 killed in crackdown on protests