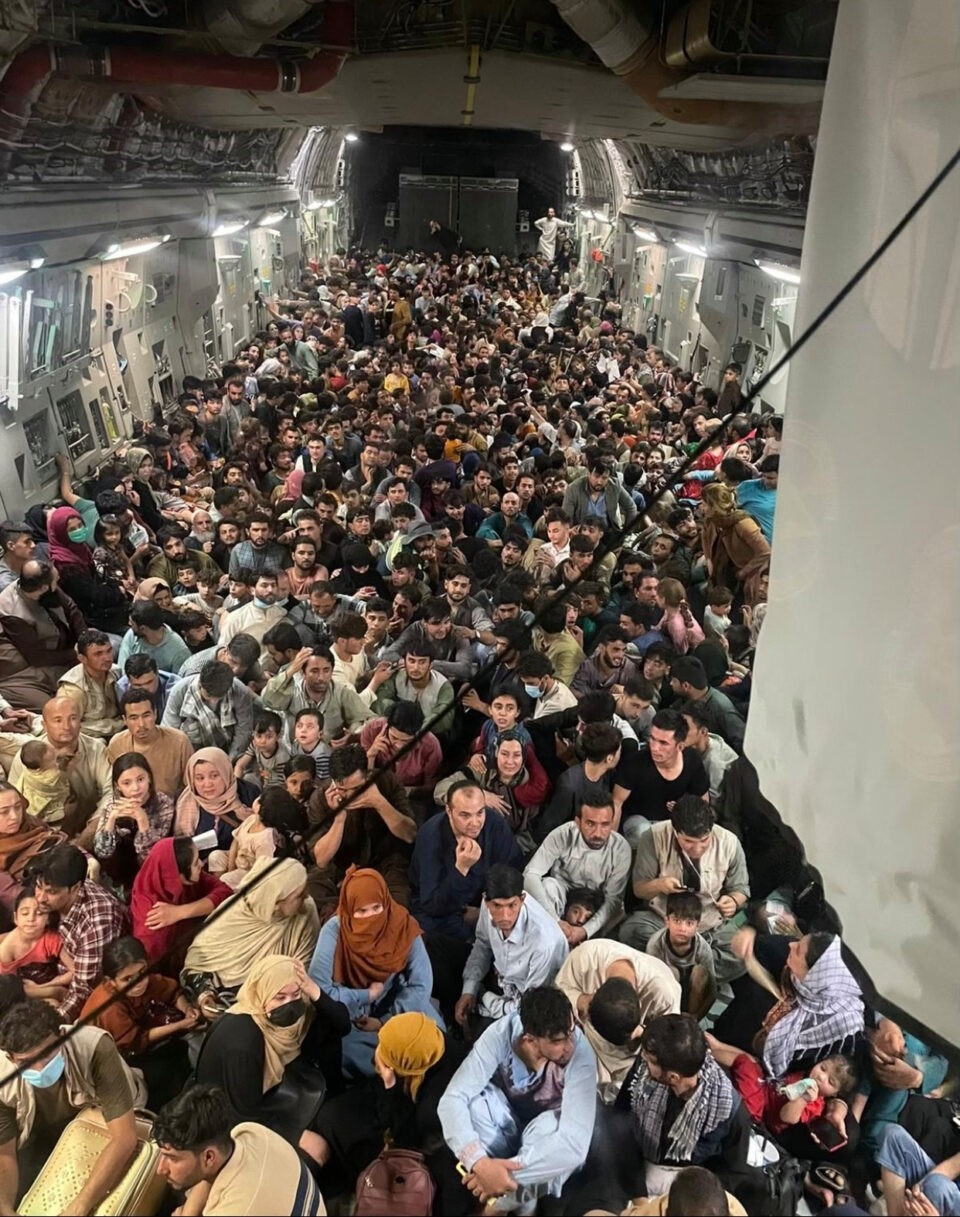 AN INCREDIBLE image has emerged showing 640 Afghans packed together on a US cargo jet as they flee the Taliban carnage in Kabul.

The harrowing pic shows the desperate crowd cramming onto the aircraft after they ran on before the military could close the ramps on Sunday.

The plane – which is equipped to comfortably fit 150 soldiers or 171,000lbs of cargo – was rushed by the terrified residents as they desperately tried to escape the war-torn country.

The crew on the US Air Force C-17 numbered RCH 871 “made the decision to go” despite the extra passengers, an unnamed defense official said.

The US has flown at least two C-17 cargo jets out of the capital so far, with more expected as the week unfolds.

Audio from onboard to an air traffic controller originally suggested there were 800 passengers, but Defense One said there were 640 when they disembarked.

As the aircraft was preparing to take off, hundreds ran onto the plane and quickly arranged themselves on the floor.

The emergence of the unbelievable image comes after a shocking video that appeared to show stowaways falling to their deaths from a transport aircraft taking off from Kabul airport.

The three apparently fell hundreds feet from the C-17 transport plane as thousands of desperate Afghans try get out of the country after the Taliban victory.

The two who died are believed to aged 16 and 17 and video posted later appeared to show residents collecting their bodies.

The chaos at Kabul Airport has already seen seven people dead with more people clambering over walls to get in.

In a bid to flee what they fear will be a return to the Taliban’s brutal rule based on an extreme interpretation of Islam, people raced to the airport in a frantic bid to board a flights.

In chaotic scenes echoing the fall of Saigon at the end of the Vietnam war, petrified men, women and children were filmed trying to get on aircraft after the Taliban stormed the capital.

With civilian flights suspended, many turned to other US Air Force aircraft to try get out of the country, while they were operating.

Despite the chaos, President Joe Biden defiantly said he “stands squarely behind” the decision to remove US troops out of Afghanistan.

Harrowing video shows stowaways falling several hundred feet to their deaths after being thrown from a C-17 transport aircraft taking off from Kabul airport.

Other images taken from the ground show stowaways clinging to the plane as it took off.

Separate footage shows Afghans running alongside a C-17 as it prepares to take off with around a dozen holding on to the wheel bay.

Sporadic shooting was heard throughout the day and the US military said its forces had shot dead two armed men by the airport security fence after coming under fire.

Civilian flights were suspended amid the chaos and then the US military – which controls the airport – said military flights were halted as they re-established security and clear people from the airport.

At one stage, US Apache helicopter gunships were brought in to clear a path for the transport planes, swooping low to disperse people massed on the runway and firing warning shots.

One witness said he had seen the bodies of five people being taken to a vehicle at the airport.

American troops guarding the airport were forced to fire shots into the air but it’s unclear if those who died were hit by bullets or crushed in the stampede.

In total 18 people have reportedly been treated for gunshot wounds at a hospital in Kabul.

Residents of Kabul today woke up to their first day under Taliban rule with reports the hardliners were scouring the city looking for military vehicles.

In the city itself there were reports that Taliban have reportedly begun house-to-house searches with a ‘kill list’.

The shocking scenes in Kabul come as…

The stampede began on Sunday night and daylight saw another wave of people swarm to the airport as the exodus continued.

Desperate people were also filmed trying climb up a ladder to get on a civilian plane while others were seen being pulled on board another aircraft.

Paras from the 16 Air Assault Brigade have been deploying to evacuate Brits from the city as well as about 2,000 Afghan nationals who worked with British forces.

It comes as NATO has revealed that all commercial flights are now suspended from Kabul airport with only military aircraft now allowed to operate.

The speed of the Taliban’s victory has shaken the world and came just weeks after troops from the US, UK and other Nato countries left Afghanistan.

By Sunday night, members of the Taliban members declared that they had been “victorious” in a statement.

In the live broadcast one insurgent said he had spent eight years in Guantanamo Bay.

Now Boris Johnson has blamed the US for the advancement of the Taliban in Afghanistan, claiming President Biden “accelerated” their control.

The Prime Minister said the “difficult” situation had been exacerbated by the President’s decision to withdraw troops from the war-torn country.

A few days ago US officials predicted it would take 30 days for the jihadis to reach Kabul – and 90 to take the city – but they have swept all before them in a terrifying rampage.

Twenty years after they were ejected by the US and its allies in the wake of 9/11 they are now back in power.

April 14 – President Joe Biden announces US troops will withdraw from Afghanistan starting on May 1 and ending on September 11.

May 4 – Taliban fighters launch a major offensive on Afghan forces in southern Helmand and at least six other provinces.

June 7 – Government officials say fighting is raging in 26 of the country’s 34 provinces.

June 22 – Taliban fighters launch a series of attacks in the north of the country, far from their traditional strongholds in the south.

July 2 – American troops quietly pull out of their main military base in Afghanistan – Bagram Air Base, ending US involvement in the war.

July 21 – Taliban insurgents control about a half of the country’s districts, according to the senior US general, underlining the scale and speed of their advance.

July 25 – US vows to continue to support Afghan troops “in the coming weeks” with intensified airstrikes to help them counter Taliban attacks.

July 26 – The United Nations says nearly 2,400 Afghan civilians were killed or wounded in May and June in escalating violence, the highest number for those months since records started in 2009.

August 6 – Zaranj in the south of the country becomes the first provincial capital to fall to the Taliban in years and many more the ensuing days, including the prized city of Kunduz in the north.

August 13 – Four more provincial capitals fall in a day, including Kandahar, the country’s second city and spiritual home of the Taliban. In the west, another key city, Herat, is overrun.

August 15 – The Taliban take the key eastern city of Jalalabad without a fight, effectively surrounding Kabul. 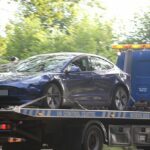 Tesla smashes into six pedestrians on the grounds of a school