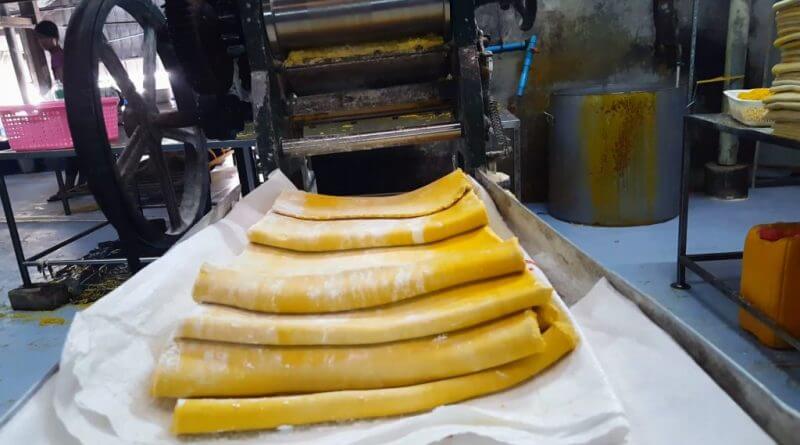 The Songkhla province made a discovery that may make noodle lovers never want to touch egg noodles again. The factory mainly produces egg noodles which is one of the most popular noodle choices in Thailand and can be found in every noodle stall and restaurant in Thailand.

The conditions inside the factory show the noodles in the making in an extremely unsanitary condition, a location that was clearly never built to be used as a food factory. Utisak Hriratanakul a doctor from the Songkhla Public Health went to inspect the noodle factory with officials from the Hatyai hospital after a complaint was made that the noodle factory has no license and has not been recognized by the Thai FDA.

The noodle factory turned out to be constructed as an extension of a normal home. There were both Thai workers and Burmese workers operating a machine that was used to knead out the bright yellow dough into flat noodles. There were also machines that were in rough condition, showing signs that it is unsafe for food production used to mix the ingredients of the noodles, cut the noodles, and package the noodles. A shipment consisting of about 50 bags of noodles were also prepared to be sent to a buyer.

The owner admitted that the factory has not been approved by the FDA along with having no legal license to run a food factory. In the past, the factory was used to grow bean sprouts but he changed it into an egg noodle factory because the bean sprout business was not going so well.

The officials have ordered the factory to stop all noodle production along with temporary shutting down the business until the owner gets approval from the FDA and a proper license to run a food factory.

No legal action will be taken against the noodle factory owner, the officials decided they would give him the chance to turn the factory around into a legal and safe factory for food production.