What if you discovered that a comet was on a collision course with Earth? And what if no one really seemed to care?

That’s the premise of Don’t Look Up, the upcoming Netflix comedy written and directed by Academy Award winner Adam McKay.

The film uses subversive humor to reflect and underscore some of the most absurd elements of the current moment we live in, and stars Oscar winners Jennifer Lawrence and Leonardo DiCaprio as two low-level astronomers who must go on a giant media tour to warn mankind of an approaching comet that will destroy planet Earth.

Timed to the film’s official trailer premiere today, we talked with Lawrence, DiCaprio and McKay about the inspiration for the film, improvising on set, and the all-star cast.

What were some of the sources of inspiration?

Adam McKay: I knew the movie needed to be laugh-out-loud funny, not just clever or wry, so I turned to the all-time greats. Comedies like Office Space and Idiocracy that really capture the weird way we live in the modern world. (Both of those Mike Judge films were north stars for me.) But also movies like Dr. Strangelove, Network, and Wag the Dog. I’ve always been intrigued with the idea of finding a way to encapsulate these giant looming threats that we’re faced with in this world, but to show it in a way that has a bit of fun with it.

What drew you to the film?

Jennifer Lawrence: I’ve always wanted to work with Adam McKay, I’m a huge fan. When I read the script, I thought it was genius. It’s maybe the funniest script I’ve ever read, and I thought it was such a poignant way to get such an important point across, that people don’t need to be fighting each other over science. We need to be fighting this collective war to save humanity together.

Leonardo DiCaprio:  Adam McKay is a director that I’d been wanting to work with for a long time. His ability to combine comedy with incredibly pertinent issues, especially with this film having the undertone of the climate crisis, so it was a unique opportunity to work with somebody that really allowed all of us as actors to collaborate and improvise. Adam is somebody that values everyone’s opinion and allows you as an actor to take a scene in any direction that you see fit.

Lawrence: I spoke to a brilliant astronomer named Amy Mainzer. I was mostly curious about what the world for a female astronomer looks like since they’re so outnumbered. That helped shape Kate’s personality, how she dresses, how she carries herself. I tried to learn about astronomy as well, but I don’t know how much of it I retained. Leo, of course, learned all of it.

DiCaprio: Amy Mainzer is our consultant and astronomer whom I had hundreds of conversations with. She helped me incredibly in playing Dr. Randall Mindy just to be able to articulate this science and basically almost gave me a Carl Sagan-like download on what astronomy is, what it means to be an astronomer, what you look for and the importance of what that means for my character. She was probably one of the most helpful elements to my character that I could’ve imagined.

McKay: Amy was incredible. She was really a major ingredient in this movie. She was constantly fact-checking the script. Honestly, I can’t imagine us being able to pull it off without her. And, and on top of it all, she had a great sense of humor. I just heard the other day she saw the movie, and she was so excited by it. And in a way, that may be the reaction I value the most. Because scientists these days have been under such attack. And the idea that she felt heard seeing the movie was really exciting for me.

Lawrence: He’s a comedy writer so he’s just coming up with hilarious material as we’re going. It was so fun to get pitched one hilarious line after another.

DiCaprio: I’ve been a fan of his work, gosh, ever since Anchorman and Step Brothers. Then right up to Vice and seeing this transition in how he’s taken on these incredibly complex political issues, but retained this dark, shrewd, intelligent comedic undertone to a lot of them. This film is, in a lot of ways, the full fruition of what he’s been able to mend together thematically and tonally in his movies. Not having had a lot of experience in that space, Adam really helped guide me through balancing the comedic elements in this role.

Did you improvise during any of your specific scenes?

Lawrence: There was a lot of improv in the film. Adam made us feel very free to move with whatever you’re feeling.

DiCaprio:  Adam gave us an interesting opportunity to try anything. And so, right off the bat, Jen and I really developed our characters on camera. It was done through a lot of different improv. There were so many different actors who came in and were given free rein to really delve into their characters. It was incredible to work alongside such amazing talent.

McKay: They all have a really great sense of the emotional line of their character. Because one of the big ways you’ll see people go wrong with improv is they’ll suddenly start doing things that aren’t consistent with their character. They’ll start doing things that are just so far afield of the tone of the script. And the great thing with actors like this is they just have a built-in compass for that. They never shattered the reality. So all the actors we had in this film, even though some people may think of some of them as very dramatic, they all were just great with improvising. They jumped right in the water and started swimming.

Can you give any examples?

DiCaprio: I just remember walking on set and Tyler Perry and Cate Blanchett already seemed like they had this amazing talk show dynamic like they had been working together for decades. They’d improvised a lot of their jokes together. I don’t know how much they rehearsed beforehand but I just remember it being an incredibly realistic dynamic and they were so locked into their characters it was pretty amazing to witness.

What about Jonah Hill and Meryl Streep, who share a lot of scenes together?

DiCaprio: I haven’t worked with Meryl since I was 18-years-old, and she had this incredible monologue, so to witness her mastery as an actor was a real gift. And then putting her in a room with Jonah Hill, who I’ve worked with and see as one of the greatest improvisational actors in the world, was inspiring. They nailed their characters and portrayed them as completely unhinged, undependable leaders, which was a huge motivation for Jen and I for the rest of the film. It was amazing to be reunited with both of them.

Why do you think comedy and entertainment are powerful tools for communicating social issues?

Lawrence: Making such a difficult thing to talk about, like climate change, lighthearted and funny, pointing out the embarrassing truths in all of us — it leaves this blameless place where we can actually look at an issue and laugh at it instead of pointing fingers at each other.

McKay: In making this movie, there was this sense of everyone collectively exhaling in relief that we could finally laugh after the insanity of the last 2 (or 20) years. And that’s not to say that laughter is the only way to deal with confusing or scary times, but I think this movie is really for all the people out there who have been living in this crazy ecosystem and just want to laugh at that and maybe have a couple of basic problems solved.  Like, can we at least do that?

Don’t Look Up opens Dec. 10 in select theaters, and is available Dec. 24 on Netflix 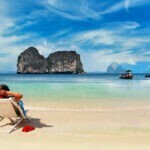 Ready to visit Thailand? Here’s what you need to know Pacquiao’s plan to appoint ‘godly’ people if he wins presidency