Home » Video: Man sets himself on fire at Pattaya temple

Pattaya Temple: A man who set himself on fire outside a Buddhist temple in Thailand was carrying dozens of losing lottery tickets, officials have said.

Peerapong Jirakunarat, 52, was spotted on CCTV carrying a large petrol tank moments before setting himself alight and filling the surrounding area with a huge flash of light.

Monks inside the Wat Sutthawat Temple in Pattaya, Thailand, rushed outside and saw the man’s body engulfed in flames at around 5am Thursday.

Fire crews arrived and found Mr Jirakunarat still covered in flames slumped against the wall of the Buddhist crematorium.

Officers extinguished the flames before recovering charred lottery tickets and bank documents from his clothes.

Head monk Sanan Khuttawanyo, 73, said: ‘I woke up and was preparing to go to alms when I noticed the smoke was rising from the crematorium. I went to check.

‘The fire was burning so I quickly called the police. The temple is locked every night and people are prohibited from coming inside. ‘There was nothing unusual last night or when I woke up this morning.’

Police identified the man from the bank documents in his pockets which showed he had debts. He was wearing black trousers, a white shirt and black shoes, police said.

He said: ‘Police were notified at 6am of the fire at the temple. ‘The Sawang Boriboon Foundation attended and the man was found burned from flames.

‘We have gathered the pile of evidence from the scene and will investigate the death thoroughly. ‘

The dead body was sent to the autopsy and forensic police hospital to find the true cause of death.

‘The cause is suicide and I will contact the relatives to clarify the full situation.’ 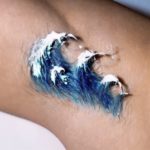 Video: Growing and styling your armpit hair could be the next kind of fashion

Thailand falling out of favour with ex-pats – survey