Hilarious Conversation: It’s hard enough communicating with a plumber at the best of times. But when it’s in a foreign country and they don’t speak English, the task is almost impossible.

However, this Australian bar owner came up with his own way of communicating with his hired help – in their own language of improvised noises.

Domenic Gentile, from Melbourne, opened the restaurant on the holiday island earlier this year and needed help with the pipework.

However, the local plumber’s English skills were not quite up to scratch – and the two men had to solve the complex problem by resorting to a series of amusing sound effects.

Footage taken last Saturday morning shows how they used their own language of amusing noises to solve a drainage problem in the men’s toilets.

The plumber is heard describing the water movement by saying ”’eee, eee” and then pointing to the place with it ”plup, plup”.

The unconventional communication seemed to work, and the plumber understood the sounds and carried on with the work.

Domenic joked: ”The key to solving plumbing issues is communicating with noise.

”We have been working together for six months while building the restaurant.

”In this time we have been teaching each other our native languages but use a mix of both and noises to communicate.” 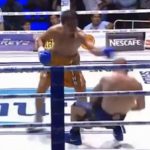