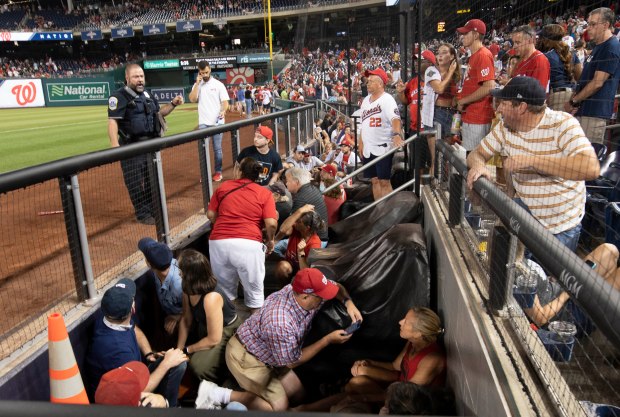 PANIC-stricken baseball fans were sent running for cover after gunshots were fired outside the Washington Nationals stadium on Saturday night, injuring four.

The chaos unfolded just after 9.30pm at Nationals Park in Washington DC as the team faced off against the San Diego Padres.

At least four people were injured by the gunfire, police say, in a drive-by shooting outside of the park’s third base gate.

Two of the victims were transported to hospital via ambulance conscious and breathing.

Another two walked into area hospitals to be treated for gunshot wounds. Their conditions are not known at this time.

One of the victims appears to be a Nationals Park employee, NBC 10 reports.

Police say the shooting was not related to the game.

Video posted to social media showed players running into the stands and ushering family members down into the dugout to take shelter.

Inside the stadium, fans were also seen scrambling towards exits and ducking for cover under tables.

A series of thunderous shots were heard booming out in the background in the live broadcast of the game at the bottom of the sixth inning, just as the Padres took to the field.

A least seven separate gunshots can be heard in the clip.

The players on the field immediately rush towards the dugout and spectators are seen leaping up from their seats.

“It was just a chaotic scene,” umpire crew chief Mark Carlson told The Associated Press. “We heard what sounded like rapid gunfire. We didn’t know where it was coming from.”

Ted Borenstein, 26, was at the game with his girlfriend and his best friend, celebrating her birthday and “having a great time” when he heard what he thought was fireworks.

Borenstein said he quickly realized it was far more serious when he saw people in the stands start filing out and watched Padres star shortstop Fernando Tatis Jr. “bolt from the field.”

In the stadium’s Diamond Club, where he and his friends were, people were hiding under tables and chairs, believing there was a shooter inside the stadium.

“People were down on the ground, kind of petrified, trying to calm down the younger kids,” he said. “I was taken aback, I was scared.”

Fans were initially warned to shelter in place by the stadium announcer.

In a tweet, the team later encouraged fans to “exit the ballpark via the CF and RF gates at this time.

“We’re working with law enforcement to provide more information as soon as it becomes available,” the Nationals wrote.

The Metropolitan Police Department confirmed in a statement that it was responding to the shooting in the 1500 block of South Capitol Street and that two people were shot.

Police said there was “no ongoing threat at this time”, adding: “This is an active investigation.”

Around two dozen police cars, ambulances, and fire engines responded to the scene.