Public donations are helping to make a prosthetic arm for a five-year-old girl who is still smiling although she lost her left arm in a motorcycle accident early this month.

On Thursday, Somkid Rakrod, director of the Muang Surin School, visited the girl at her house after she was discharged from Surin provincial hospital.

Apai Ruanrin, the father of Noona, said the public had so far donated Bt58,567 for the cost of her prosthetic arm.

The father said the wound was healing well and was being cleaned every two days. The doctor plans to remove the stitches on July 3.

On June 7, the girl was riding a motorcycle with her mother when her shirt got entangled in the back wheel, pulling her arm into the wheel.

Rescuers said they were surprised by the girl’s courage as she did not cry at all.

The father said the family would welcome help for the cost of her prosthetic arm that would have to be changed regularly when she is growing up. 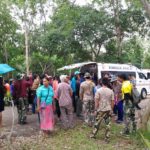 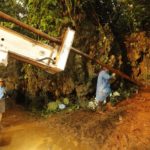