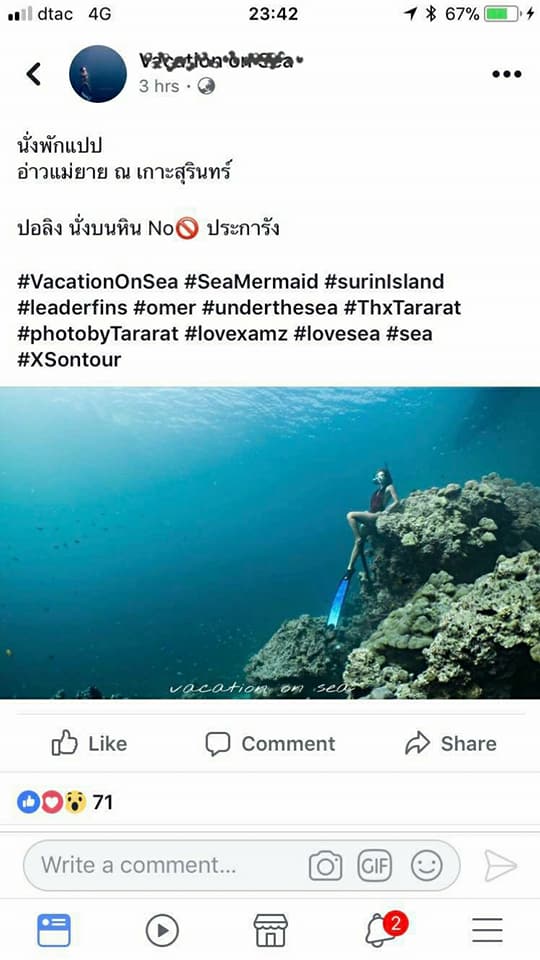 Photos of two Thai women having a top-model moment as they pose sitting on coral reefs at Mae Yai Bay have enraged marine scientists and social media, as the bay has actually been closed for tourism due to coral bleaching.

The photos became a topic of discussion after Jirapong Jeerawongsakul, a former marine scientist at WWF Thailand, posted the photos of the two women sitting on coral reefs on his personal Facebook page. Coconuts later found they were from the travel blog “Vacation on Sea.”

Jirapong responded with a post that said, “Don’t show off your stupidity by saying you’re sitting on a rock. You just don’t know that they’re coral reefs.”

He elaborated, “The Mu Koh Surin National Park has had problems with tourists trespassing into the Mae Yai Bay. This bay that has been closed for coral reef restoration…These tourists’ activity disturbed the coral reefs as pictured.”

Jirapong did not immediately reply for Coconuts’ request for comments.

Meanwhile, another marine biologist Thon Thamrongnawasawat also shared the photos on Facebook, writing, “In the past, Mae Yai Bay was the site of the most beautiful coral reefs in Thailand, but it suffered from coral bleaching and has been closed off since 1995.”

He added, “Stepping or posing on the coral reefs are a disturbance of [their restoration.] I believe the world has so many places to pose for photos, without violating the laws and hurting our fellow sea creatures.”

The blog Vacation on Sea later published a statement after they were bombarded with media and netizen comments. They said, “We didn’t know any better. We’re sorry, and we won’t do it again. The park officials have disciplined and fined us.”

All we know is that their blog’s has 342 reviews, and they are all one-starred.

“If you care about the beauty of the nature, be more aware about the coral reefs that you are destroying. Otherwise, you are just another idiotic wannabe popular attention seeker [sic],” Cindy Salinthip V wrote.

“Poor judgement of the whole crew. You should promote natural preservation, not destroying it,” Pongpun Homsirikamol wrote.