No charges against Uni lecturer forcing students to pose nude

An art teacher at Silpakorn, a Thai university famous for art programs, who forced female students into nude poses for pictures will not face any punishment, or even has his name revealed to the public.

The decision has been met with disbelief from the young victims and there families, who are now contemplating taking the matter into the courts.

Reports on the incident first appeared midway through July that the investigation was taking place, and according to a university statement issued Monday, the professor in question has, in fact, requested female students to pose nude while alone with him.

Since he is a guest lecturer, the only action the university can take is to stop inviting him to teach.

“This person is a guest lecturer in the Faculty of Decorative Arts and has abused his position as a teacher to talk female students into doing inappropriate photo shoots,” the statement said.

“Because this guest lecturer, who conducted this inappropriate action, is not a faculty member of Silpakorn University, we cannot proceed with disciplinary punishments, but the students who were victims of this lecturer could take legal action, with the support of the university.”

The statement angered the public. Many left comments, demanding the university reveal the teacher’s name.

The abuse came to the attention of the public in July, when the boyfriend of one victim posted the story on Pantip forum, after which it went viral across several over media and social media platforms.

In the post, the professor reportedly asked the female student to pose for him as a character in Thai literature for him to draw, but when she got there, he demanded her to remove her clothes and even pose in a lewd, spread-eagle position.

Another victim came forward to Amarin TV this week to say that she was also abused by this teacher in 2015.

The victim, who was not named, said she was also asked to pose as a literature character. At first, the photo shoot was normal until the teacher started touching her to adjust her posing.

“I stepped away and said that I could do the poses myself,” she said.

“Then he demanded that I take off all of my clothes. I immediately said no. I told him to go hire a nude model. But he insisted that I do it. All I could do was step away from him. Then I had enough. I started putting on my clothes. And he kept taking photos of me while I put on my clothes. It was terrifying.”

The victim said there were four other students at Silpakorn who were abused by this teacher. She believed that he probably has done the same to students at other universities where he has taught.

“He doesn’t have the qualification to be a teacher, and he doesn’t deserve to have a job anywhere else. It’s not fair for us at all,” she said.

The five victims are discussing whether they will take legal action. 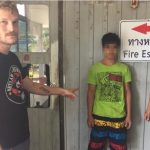 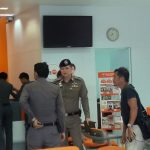