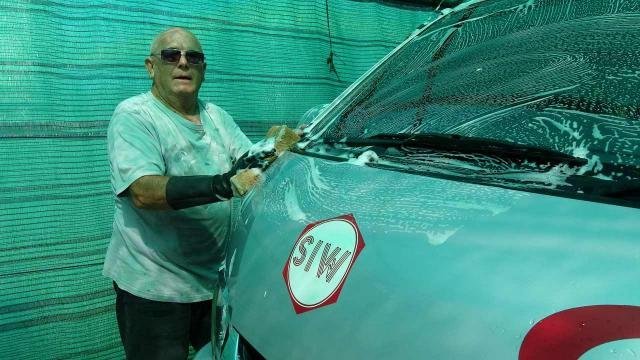 Farang washing Cars: Ban Muang reported on an Australian pensioner who is washing cars in Thailand to make ends meet.

And him and his wife are earning a tidy sum.

The Thai media said customers were praising William Pearl for his cleaning and said he felt no shame in their headline.

The shop is in Muang district of Rayong on Rat-uthit Road.

Ban Muang said he had been helping out with the cleaning of cars since the start of the year. He said that he usually played golf on that day and slept in front of the TV.

It was much better to be out doing something useful and the shop was making 5,000 baht to 6,000 baht a day cleaning an average of 20 cars.

Smiling wife Srinuan gives the cars a wipe while Mr Pearl gets out the hose and shampoo. “I’m not tired – I love it” he said.

Kids from the local schools are employed in their free time for 300 baht a day, he added.

Ban Muang quoted an unnamed customer as saying that Mr Pearl did a great job and was a hard working individual who did not squander money.

Ferris wheel horror in Indonesia as gondolas flip upside down