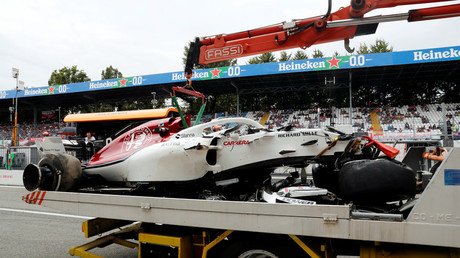 F1 driver Marcus Ericsson amazingly walked away unscathed from a huge smash during practice for the Italian Grand Prix after hitting a wall at 220mph.Sauber driver Ericsson was approaching the first corner at Monza on Friday when his rear DRS (drag reduction system) failed, causing him to swerve into the wall before flipping over several times as debris littered the racetrack.

The Swede, 27, remarkably emerged from the horror smash, and although he appeared to limp as he returned to the garage he later said he was “OK” after a medical check.

The crash led to a red flag at the practice session as the track was cleared and the smashed-up Sauber removed from the track.

The ‘halo’ head safety device was credited with saving Leclerc from serious injury on that occasion, when it deflected Fernando Alonso’s McLaren as it flew over the Frenchman’s head.

The system was also praised in protecting Ericsson in the high-speed smash at Monza.

Ferrari’s Sebastian Vettel was quickest in the second practice session in Italy, despite suffering a high-speed spin himself.

The German is seeking to further cut the gap on championship leader Lewis Hamilton, after beating the British driver to victory at Spa in Belgium last Sunday.