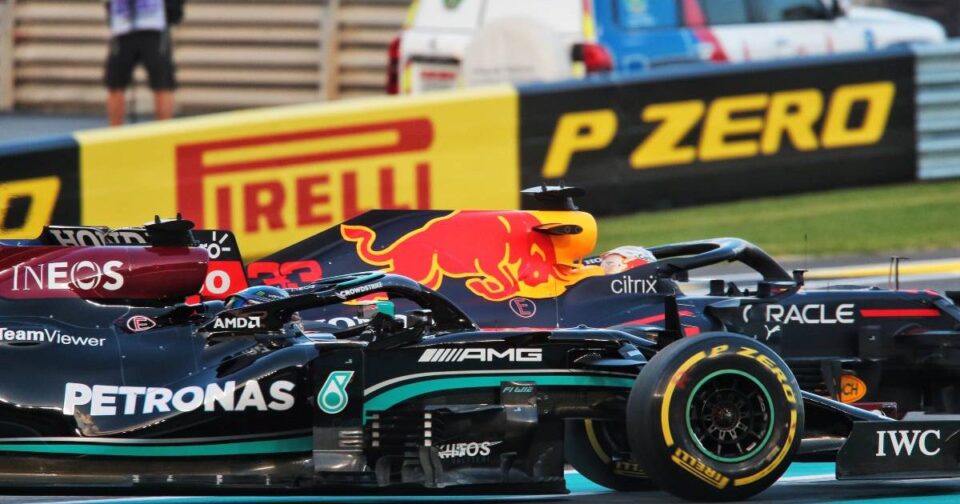 When the sports editor of the Metro came to me and asked if I fancied knocking up a season predictions article for the 2022 Formula 1 season, my heart sank a little.

That is because what he may as well have said is: ‘So, Dan, how would you like to open yourself up to humiliation and ridicule on the internet by predicting all manner of quite complicated things about Formula 1 as it enters an enormously revamped era of technical regulations and is therefore nigh on impossible to make any assumptions about?’

Between the athletes, technology, and politics which form the foundations of the sport, there are so many moving parts in F1 that comprehensively predicting the outcomes of any season is immensely difficult, but the new era of ground effect car design renders the task impossible.

The technical shift has primarily been devised in order to allow F1 cars to follow one another more closely.

The previous era’s machinery lost so much downforce in the dirt of the car in front that following was difficult and overtaking was impossible at some circuits on the calendar.

F1 is hoping that changes to aerodynamic rules will reduce the loss of downforce when following, allow drivers to race one another harder, and lead to more overtaking.

The changes mean there is potential for the grid order to be shaken up, with teams who have nailed the transition moving forward while those who have not slip backwards. Which all makes my job here so much harder. Thanks very much, F1.

You may have noticed by know that I am stalling for time and promoting all of my excuses, caveats, and admonishing of responsibility early before actually publishing my opinions. So with all that said and done, here we go — this is what I think might, maybe, perhaps, just about happen in Formula in 2022.

Who will win the F1 drivers’ championship in 2022?

Max Verstappen is unquestionably the fastest driver on the grid and, going into the early stages of the season at least, Red Bull have the fastest car.

That combination means the Dutchman is favourite to win what would be his second world championship. If he can combine his raw pace with better race management and more on-track caution when a situation calls for it, he could simply be untouchable.

Lewis Hamilton will run him close, again, though things won’t finish quite as dramatically as they did in Abu Dhabi in 2021.

What will ultimately cost Hamilton is the deficit the Silver Arrows will have to claw back to Red Bull at the beginning of the season, with the 37-year-old in contention for more race wins at the end of the campaign once the W13 has been further developed.

Charles Leclerc and Carlos Sainz will both win races, but the Monegasque will finish on the podium consistently enough to beat his team-mate, while George Russell will finish higher than Sergio Perez.

Who will win the F1 constructors championship’ in 2022?

Mercedes might not have completely nailed their initial concept for 2022, but the W13 seems to have great potential and the team is usually excellent at developing upgrades efficiently.

Combined with a very consistent driver pairing, that should be enough for the team to secure a ninth consecutive constructors’ title.

The race for all three of the top positions will be close, though, and despite Verstappen’s championship victory, Ferrari’s Leclerc and Sainz pairing will just about deliver more points than their Red Bull counterparts over the course of the campaign.

Yuki Tsunoda will gradually become less notorious for swearing over the radio, making faeces and fart jokes, and crashing, by becoming an impressively regular points scorer and will flirt with podium finishes a couple of times across the course of the campaign.

He improved significantly in the final stages of the 2021 campaign, scoring his best result at Abu Dhabi, and seems to have spent the winter focusing on the physical deficiencies and concentration issues which cost him big in his rookie campaign.

At least one race per F1 season tends to descend into absolute farce one way or another, with the weather and errant driving combining to push the regular race winners down the order, leaving an open goal for the most opportunistic midfield runner to score.

Pierre Gasly took his debut win after the red flag came out in Monza in 2020, while Esteban Ocon did the same at Budapest a year later.

In 2022, the surprise winner will be Lance Stroll. The basis for this is that he has come relatively close before, having qualified on pole in wet conditions in Turkey in 2020 and taken a podium with Williams at Monza, and… well, it would be a surprise, wouldn’t it?

No point going safe with these guesses. Where is the fun in that?

What will be the biggest F1 disappointment in 2022?

El Plan will be going in El Wheelie Bin this season.

Not much about Alpine seems reassuring going into 2022.

The team has undergone significant leadership upheaval over the winter, is balancing the development of both a brand new car and entirely revamped power unit, and they didn’t look particularly quick or reliable across the course of the two pre-season tests.

Fernando Alonso came back to Formula 1 in 2021 determined to challenge for a third world championship, which the staggering level of talent he has displayed across the course of his career certainly merits, but Alpine won’t be able to deliver him the car he needs to truly compete and the Spaniard will be wondering whether it’s all really worth sticking around for after a third-or-so of the season.

Which track will replace the F1 Russian Grand Prix?

There are plenty of locations Formula 1 could choose to visit in lieu of the cancelled grand prix in Sochi which had been scheduled for September, including tracks which have made recent stand-in appearances on the calendar like Portimao, the Nürburgring and Istanbul Park.

My overwhelming preference would be for the Kyalami circuit in South Africa to be added to the calendar.

F1 is a world championship and as part of its very late but very welcome drive to increase diversity in the sport, racing in Africa each year should be an immediate priority. This year might be too short notice, unfortunately.

So let’s plump for Sepang, former home of the Malaysian Grand Prix. There are already enough races in Europe and Sepang is a great circuit, full of a variety of different corners with punishing gravel traps and the potential for monsoons to be unleashed at a moment’s notice. Sign me up.

Which F1 driver transfers and retirements could happen?

Fernando Alonso will announce he is stepping away from F1 in the autumn with Alpine looking extremely unlikely to challenge for race wins in the coming years, with Oscar Piastri being promoted to partner Esteban Ocon for the French squad. Piastri will also compete in his first grand prix in 2021 as a stand-in driver, either for Alpine or via a temporary loan to another team on the grid.

With Aston Martin mired in the midfield too, Sebastian Vettel will also call it a day and move on to some sort of eco-entrepreneurial venture in the style of Nico Rosberg.

Daniel Ricciardo’s deal with McLaren will be allowed to expire, and he will replace former team-mate Vettel at Aston. In his place, McLaren will bring in Mexican driver Pato O’Ward from IndyCar to partner Lando Norris.

Elsewhere, Nicholas Latifi will be dropped by Williams after a mediocre third campaign with the team, and be replaced by Guanyu Zhou, whose Alfa Romeo seat will go to the driver who will win the Formula 2 championship in 2022, Theo Pourchaire.

To finish off, here with go some quickfire shouts about the wider world of Formula 1 drama.

Well then, that’s about everything covered for Formula 1 in 2022. Let’s definitely not all come back at the end of November to see how much of this turned out to be true, and how much was complete and utter nonsense. Putin lays out his demands in Turkish phone call