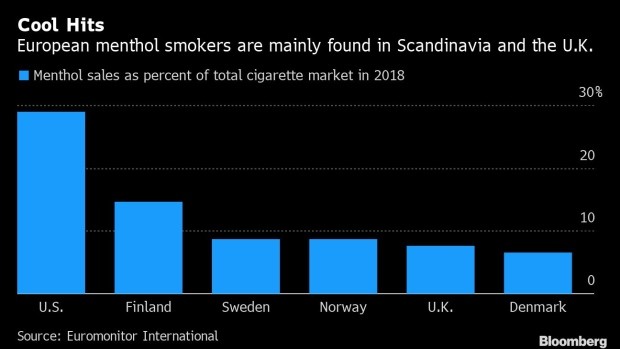 In January, Imperial Brands Plc started selling cardboard strips that can be inserted into a cigarette pack or pouch of rolling tobacco to impart a peppermint aroma. Rival Japan Tobacco Inc. has introduced cigarillos—small cigars that are exempt from the ban—with capsules that release menthol at the push of a button.

The EU in May will prohibit the sale of menthol cigarettes. While they represent less than 5% of the market in Western Europe, according to Euromonitor analyst Jose Becerril, they generate $11 billion in sales across the continent.

The flavored smokes have been targeted by anti-smoking groups that say they promote addiction by disguising the harshness of tobacco. Public health charity Action on Smoking and Health criticized Imperial and Japan Tobacco, saying they’re trying to pre-emptively undermine the ban with their new products.

“It’s disgraceful behavior from companies which say they’re not trying to addict youth,” said Deborah Arnott, chief executive of Action on Smoking and Health. “If the government doesn’t act quickly to put a stop to these practices, we expect them to quickly become widespread.”

In the U.S. the Food and Drug Administration has already banned most cigarettes with flavors and is examining options for regulating menthol. The tobacco companies’ approach to the EU ban may give some hints as to what they’d do if the U.S. made a similar move.

Menthol is a far bigger business in the U.S., accounting for about one-third of cigarette sales.

There are pockets of popularity in Europe, though. In the U.K., about one-quarter of the market consists of menthol and crushball cigarettes, which contain flavors that can be activated at the push of a click-switch, according to Imperial spokesman Simon Evans. That would amount to some $4.7 billion, according to Euromonitor.

The EU measures will intensify competition to lure menthol fans to alternatives, including IQOS, the heated-tobacco device made by Philip Morris International Inc., which is exempt from the pending rules. The tobacco giant last year came out with new menthol heat sticks for IQOS.

While there’s little evidence to suggest that menthol cigarettes are more toxic or riskier than regular cigarettes, public-health groups say they attract young people and may be more addictive as those smokers are less likely to quit successfully.

EU countries approved the ban in 2016. It doesn’t apply to the infusion cards sold by Imperial because those are considered smoking accessories and not tobacco products.

Imperial’s card fits inside a pack of cigarettes, and after at least an hour the contents of the pack take on the flavor. Imperial can advertise them and they can be displayed in stores, unlike most tobacco products, which need to be kept under the counter in countries including the U.K. Imperial, the maker of Rizla rolling paper, has already been selling menthol filter tips for loose tobacco for years, and the company plans to offer the new strips in other European countries.

Japan Tobacco, which started selling its Sterling Dual Capsule Leaf Wrapped menthol cigarillo in the U.K. in January, said the ban is unlikely to prevent menthol cigarette smokers from using other tobacco products.

“There’s going to be some disruption,” said Nico von Stackelberg, an analyst at Liberum. He said younger experimenters may switch to one of the many smoking alternatives, while the older die-hards are more likely to struggle with the transition and quit nicotine. “Smokers may find transitioning to heated tobacco or vaping products is a lot easier than going cold turkey.”

The question is how many menthol smokers would rather quit smoking than switch to an alternative product. After Canada prohibited menthol-flavoured tobacco in October 2017, quitting rates among menthol smokers in Ontario were higher than those of non-menthol smokers one year later, according to a study led by the University of Toronto’s Michael Chaiton and colleagues.

Whether Europe will see the same trend remains to be seen, as there are far more alternatives for menthol smokers available today.

Menthol sales are not being discontinued in Switzerland, which is outside the EU. The discrepancy in regulation could fuel smuggling.

Michael R. Bloomberg, founder and majority owner of Bloomberg News parent Bloomberg LP, has campaigned and given money in support of a nationwide ban on flavored e-cigarettes and tobacco. 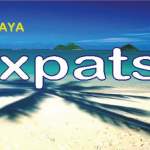 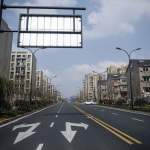