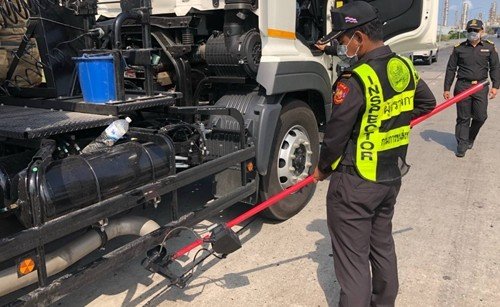 The Department of Land Transport (DLT) continues to inspect trucks and passenger vehicles for black smoke emission on roads in and around Bangkok in a sustained effort to solve air pollution.

Deputy DLT Director General Kamol Buranapong disclosed the agency’s inspection at 31 locations in 15 provinces has detected vehicles which might emit black smoke during 1-19 February 2019 and found 686 out of a total of 24,116 vehicles did so, 608 of which being cargo trucks and 78 others being passenger vehicles.

He said legal action has been taken against the owners of those polluting vehicles, while tickets have been issued for 772 vehicles found emitting black smoke at 30-45% level, requiring proper maintenance to reduce the emission.

The DLT immediately imposes 5,000 baht in fines for any vehicle emitting black smoke at above 45% level, and brands them up with the “Do Not Use” sign until proper maintenance has been done. The owners of vehicles can request for inspection at all local offices of the department nationwide.

RID calls on all sectors to use water sparingly