Auto-parts maker Somchai Wayrotepipat has agreed to pay 45 million baht in damages to the daughters and relatives of a police officer who was killed along with his wife in a head-on collision in Bangkok during the Songkran festival.

Thai media reported the deal was settled at the Sala Daeng police station in Bang Kae district on Thursday.

Mr Somchai, his lawyer, relatives of the damaged family and their insurance agents were there to consider appropriate damages for the family following the collision that killed Pol Lt Col Chatuporn Ngamsuwichakul, 48, of the Crime Suppression Division, and his wife Nuchanart, 44, in mid-April.

Lawyer Weerawut Bamrungjai said Pol Lt Col Chatuporn’s mother and a senior relative of Nuchanart would each receive 2.5 million baht in compensation for the financial support they would otherwise be receiving from the couple.

Their two daughters, aged 15 and 12, would get 15 million baht each. A trustee will be appointed by the Central Juvenile and Family Court to keep the money for them until they come of age.

The lawyer said Mr Somchai still felt guilty about the crash as he also had two daughters of school ages. Besides, he has quit drinking and driving, the lawyer said.

The girl recovered and already returned to school. 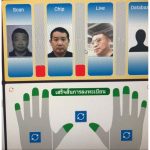