Netflix has released a trailer for their upcoming series Dracula. Based on the novel by Bram Stoker and created from the folks behind the BBC’s Sherlock, the new take on the classic monster sees Dracula (Claes Bang) up against a worthy foe.

I’m honestly not sure what to make of this new series. Dracula has been done to death, but then again, so had Sherlock Holmes, and creators Mark Gatiss and Steven Moffat were able to find a fresh spark with that property before it ran out of steam after a few seasons.

Dracula offers the same promise (a rich, interesting character) and same pitfalls (there have been countless adaptations, so why would anyone tune in for this one).

Judging by the trailer, it looks more in line with the Universal Pictures adaptation of the property starring Bela Lugosi, but with a bit of a modern update in terms of style and production values.

Of course, the weirdest and best moment is when a bunch of nuns just break out some stakes. That makes the show look pretty fun, and it certainly piques my curiosity. 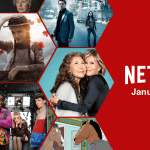 Everything Coming to Netflix This Weekend