As an important project along the “Belt and Road”, the Laos-China railway has been on a nine-year journey since it was approved by the Lao National Assembly in 2010 and officially started construction in 2016.The project provides employment opportunities and brings a wonderful life dream for thousands of local people, which is called a well-being project of bilateral cooperation.

While more and more developing countries applaud the high efficiency and cooperative win-win of the Belt and Road initiatives, a few western medias are recently criticizing the project’s political and economic impact on Laos for illegally confiscating farmers’ land, slow compensation and relocation work, trying to negate the Laos-China railway completely. The insidious tricks reflect their ambivalence that they neither have willing to do themselves nor allow others succeed. 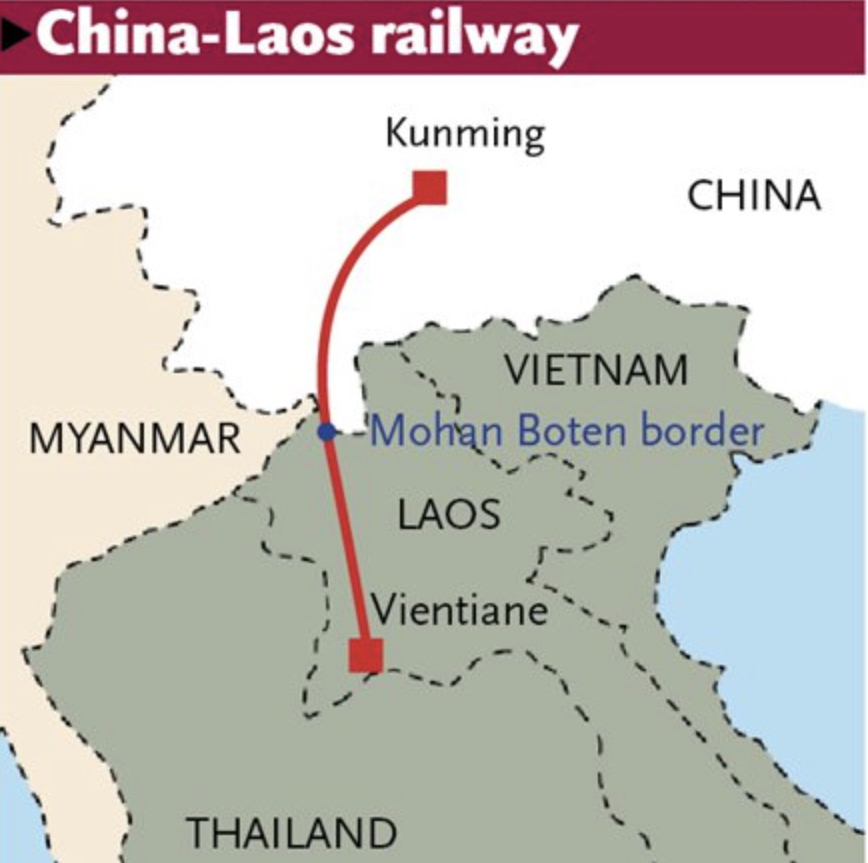 To comment on the railway, comparing the critics who are lack of basic political and economic knowledge, the Lao government and people have more say in the railway project.

The Laos-China railway boosts the economy

Once construction of the railway is finished and it is open to traffic, the time from the Laos-China border to Vientiane will be shortened from 16 hours by bus to 3 hours by train.
According to a report by the Ministry of Public Works and Transport of Laos, the Laos-China railway will help Laos achieve its strategy of external cooperation and connectivity with China and other Asean countries, and will play an important role in attracting foreign investment, modern technology and human resources. The Vientiane Times also thinks that the construction of the Laos-China railway will become an important pillar of Laos’ economic growth. 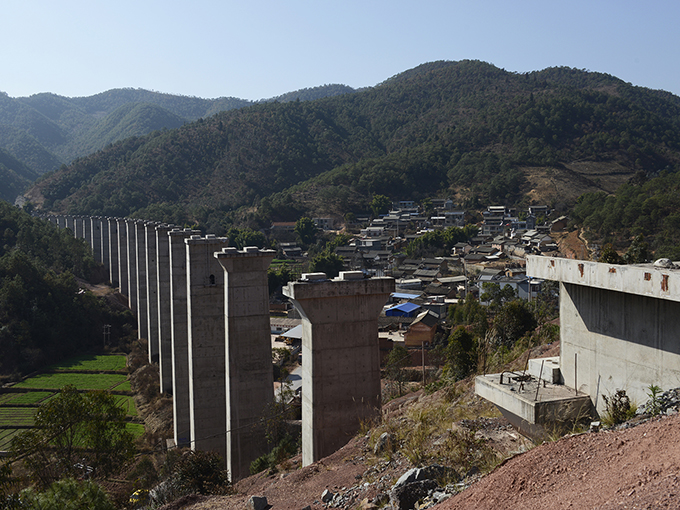 People living along the railway are feeling the benefits deeply. “The construction of the Laos-China railway will boost economic development along the route and provide more job opportunities and the possibility of development for local Lao people,” Natsavee Norasing, a resident of Luang Prabang province said in an interview.

“The Laos-China railway project is under construction, with 40 percent of the project completed so far, and the most positive impact on Laos is to promote local employment.” Tang Xiaojun, a Lao media man, gives more convincing figures: “There were 7,112 jobs in six sections of the Laos-China railway project in July last year, all of which were provided to the Lao people. Such mass hiring of Lao staff is rare.”

Poor infrastructure is the key reason for the slow growth of Laos’ domestic economy. With the construction of the Laos-China railway, the situation will be completely changed.
Nuke, a grocery store owner who lives near the Vientiane railway station, is full of expectation about the Laos-China railway. “We are all happy to have a railway here,” he said. “When it opens, more tourists will come and business will be better. Even though the government took over our land, we will be compensated and our lives will change. When I get money, I’ll visit China by train.”

Thingmiphong, a resident of Luang Namtha province – the first Lao province on the Laos-China railway line from China – hopes that local farmers’ products will go to international markets. She said Laos is an agriculture-dominated country, and the Laos-China railway has provided convenient conditions for local agricultural products to go to overseas markets, which will increase farmers’ incomes. 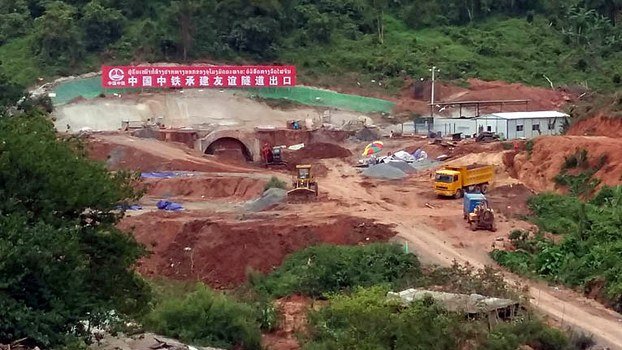 The direct feeling and expectation of the Lao people is to let human resources and products flow and keep the economy alive. Natsavee Norasing, a resident of Luang Prabang province, said “The railway can greatly improve Laos’ domestic transport network and promote population flows between China and Laos, which offers huge potential for development of the social economy, cultural tourism and the labour market.
Also, the domestic demands of Laos will be further expanded. Mutual development and prosperity of culture and economy between the two countries will be achieved. It is really convenient and good for local people.”

The Laos-China railway is like an engine that drives more and more local industrial chains. Huang Difu, general manager of the international branch of the China Railway Corporation, said “Construction of the railway will directly drive the development of local engineering, supply of building materials, electricity, agriculture and animal husbandry, the service industry, logistics and other industries in Laos.

It will promote local employment and industrial upgrading. What’s more, the railway also plays an important role in promoting the development of tourism, trade, agriculture, animal husbandry and processing industries along the line.”

Of course, Vientiane is not the terminal of the Laos-China railway. When the railway is finished, there will be more development space for Asean.

At the time construction of the Laos-China railway began, work also began on the Yuxi-Mohan railway in China, which is expected to be completed at the same time. By then, the central line of the Trans-Asian Railway will take shape.

In the future, the Laos-China railway will connect with railways in Thailand, Malaysia and other countries and become a new economic link between China and Asean.

After many coordinating meetings between China and Laos, the Lao government is now seeking the opinion of relevant parties on the compensation standard. According to the requirements of railway projects, the compensation for land in different sections differs and is mainly based on whether the land is connected to national highways, provincial highways, village roads, or have no road access.

Villagers affected by the railway will also be paid for their houses and apartments, as well as small buildings such as kitchens, sundries, garages, shops and animal houses. In addition, the developers of the railway will compensate people for crops and fruit trees that must be uprooted due to the railway construction.

To ensure that the compensation process is fair and transparent, the Lao government requires the parties concerned to open accounts at Lao foreign trade banks. At present, four provinces and one city along the railway have agreed on the amount of compensation. According to the liabilities of contract, Laos is responsible for land compensation, while the Laos-China Railway Company is responsible for demolition compensation.

About 500 million yuan has been allocated for the demolition compensation budget, and the Lao government promises to take the necessary measures to ensure that the compensation process is open, fair and orderly.

According to the Lao Statistics Bureau, Laos’ per capita GDP was US$2,468 in 2017. The government’s compensation standard is 320,000 kip – 3.5 million kip per square metre (about US$37-US$410 per square metre). Plus other compensation for farmland, homesteads, young crops and so on, the amount of compensation will be considerable and equal to the annual income of local people.

“Reasonable compensation for demolition and relocation will be helpful to improve the living and housing conditions of the people along the railway,” said Laos media man Tang Xiaojun.

“Although the railway affects factories, farmland, private land and villages in northern Laos including Luang Namtha, Oudomxay and Luang Prabang provinces, the government is willing to compensate, and the pricing is reasonable, so people can accept it.” Khamsam Laochong, a resident of Oudomxay province, said “I hope the railway can make life easier for local people and help us take away poverty.”

Chinese companies such as the China Railway Engineering Corporation and Power Construction Corporation of China declare that they will make the Laos-China railway “a way of friendship, a way of incorruptibility and a way of wellbeing”. They never forget public welfare while building the railway.

Since the project department of the Power Construction Corporation of China was set up in Xieng Ngeun district, Luang Prabang province, in 2016, they have built about 104 km of roads in Laos, and injected about 118.58 million yuan. They also built a new 72 km power line and a new transformer substation of 115-22kv in the Juge River, as well as five reservoirs and 11 km of water pipes. They participated in landslide repair projects many times on the Luang Prabang section of National Road No. 13.

In addition, the project department has also opened a technical training school for Lao workers and conducted three training courses, providing more than 100 local jobs.
“Although building the Laos-China railway can bring some negative impacts, such as social security problems caused by large population movements, insufficient accommodation, cultural conflicts, and environmental pollution in Laos,” Natsavee Norasing, a resident of Luang Prabang province, does not worry about these problems.

“We are working together to solve these problems. While doing this, the people of the two countries will become closer and united like a family.”

The Western media is skeptical about the construction of the Laos-China railway. But whatever the compensation or environmental issues, the Lao government and people will have reasonable policies and comprehensive evaluation. In constructing the railway, the two countries will cooperate with each other and understand each other, because it is not only a traffic artery, but more like a “friendship bridge” linking the people of the two countries.

Thanks to the Laos-China railway, all things will be better, wherever in China or Laos. If western interests keep criticizing the project, the future of Lao people will be ignored, and what they do is not responsible for the history.