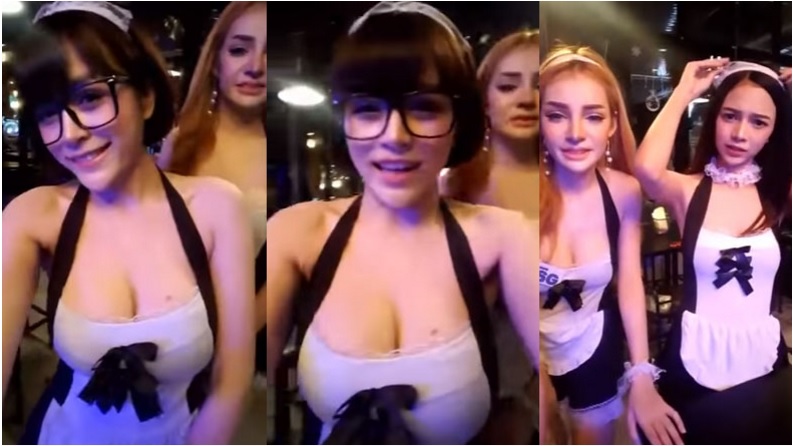 A cosplay bar hostess in Saraburi, a province north of Bangkok, was charged for inviting people to drink alcohol at her bar in a Facebook Live video, which violates Thailand’s Alcohol Control Act.

The July 23 video opened with Janjira “Pangpond” Jangsaka, 23, greeting her Facebook followers, before Nantarika “Fahsai” Puekkleng, and Nantida “Alice” Punyamanoch join her on camera. Janjira then tells viewers about the “buy one beer, get one free” promotion at the establishment “Bar-cony Bar & Eatery.”

Yesterday, Saraburi police summoned the three pretty girls after their video received attention on social media. But it wasn’t to ask them to share a beer, it was to have their mugshots snapped.Janjira admitted to talking about the bar’s beer promotion in the video, claiming she didn’t know it was against the law, Daily News reported.

In the end, Janjira was the only one held accountable and she acknowledged charges of “encouraging the consumption of alcohol directly or indirectly” and will go to trial. The charge is punishable by a maximum fine of THB500,000 and/or a one year prison term.

Only last month, four A-list celebrities were summoned to hear the same charge for posting beer selfies on social media that appeared to be part of a sponsored campaign for an alcohol brand, according to  Khaosod English.

Don’t hold your breath, but the Pattaya underpass is due to open on August 25th