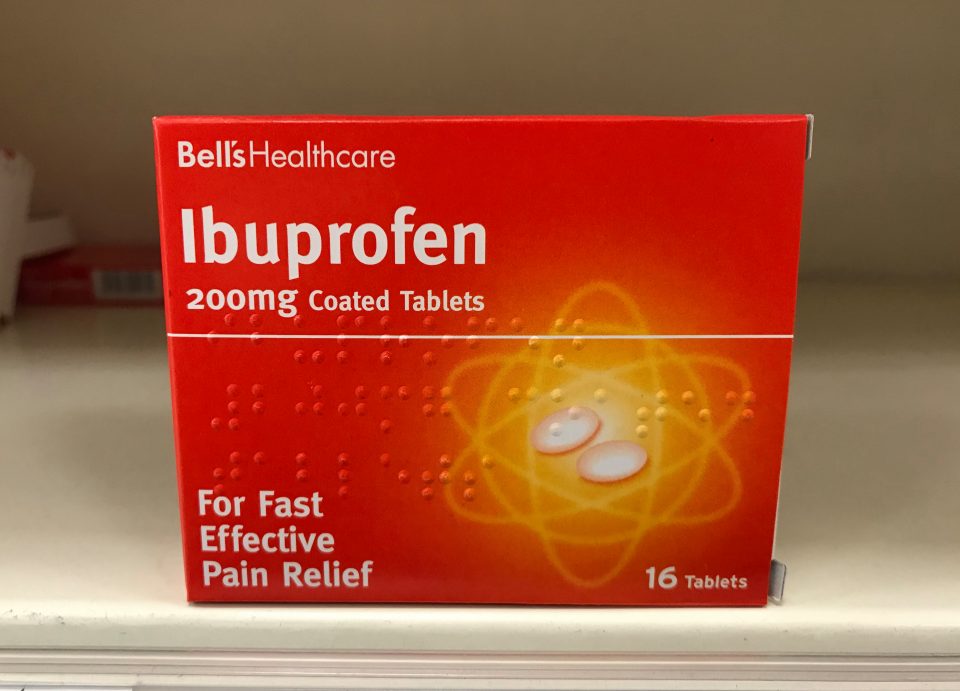 Stories have been circulating online suggesting it’s dangerous to take ibuprofen if you have coronavirus. Alongside genuine medical advice, false messages have been spreading, distorting the facts.

Speaking to the BBC, medical professionals said that ibuprofen should not be used to manage the symptoms of coronavirus. Those already taking ibuprofen for other conditions should not stop without consulting a doctor.

Both paracetamol and ibuprofen can bring a temperature down and help with flu-like symptoms. But ibuprofen and other non-steroidal anti-inflammatory drugs (NSAIDs) are not suitable for everyone and can cause side-effects – especially for people with asthma, heart and circulatory problems.

The NHS website previously recommended both paracetamol and ibuprofen, but has since changed its advice to say that while “there is currently no strong evidence that ibuprofen can make coronavirus (Covid-19) worse… until we have more information, take paracetamol to treat the symptoms of coronavirus, unless your doctor has told you paracetamol is not suitable for you.”

The NHS also says that people who are already taking ibuprofen on the advice of a doctor, should not stop taking it without checking first.

Although we don’t yet know whether ibuprofen has a particular effect on the severity or length of illnesses caused by coronavirus – either in healthy people or those with underlying conditions – Dr Charlotte Warren-Gash, of the London School of Hygiene and Tropical Medicine, says, especially for vulnerable patients, “it seems sensible to stick to paracetamol as first choice”.

It has come to our attention that there is a WhatsApp message being circulated purporting to be from the ID consultants in Cork, all of whom are members of @IDSIreland. It's signed Dr Tim. This is a fake message, please ignore and delete. Thanks.

There is some evidence linking ibuprofen to more severe illness from other respiratory infections.

But whatever the advice, there’s still been a great deal of misinformation online. Bogus messages have been circulating on WhatsApp claiming that:

• The University of Vienna has sent a memo warning people with coronavirus symptoms not to take ibuprofen, “because it has been discovered that it increases the speed of reproduction of the coronavirus Covid-19 in the body and this is the reason why people in Italy have reached the current bad stage and rapid spread” (false)

• “At the university hospital in Toulouse, France, there are four very critical cases of coronavirus in [young people] who do not have any health problems. Their problem is that when they all appeared to have symptoms, they all took painkillers like ibuprofen” (false)

These stories circulating on WhatsApp are also appearing on different platforms including Instagram.

Commonly these kinds of copied-and-pasted texts will claim to be from someone the forwarder says they know, often with a medical background.

All these claims are false

The Infectious Diseases Society of Ireland said a WhatsApp message circulating about coronavirus patients in Cork is “a fake message”, asking anyone who receives it to “ignore and delete”.

Toulouse University Hospital warned that inaccurate information was circulating on social networks, saying it would not have discussed the care of patients due to medical confidentiality.

So what do we know about ibuprofen and Covid-19?

There has been no research into ibuprofen and the new coronavirus (Covid-19).

But there has been some for other respiratory infections, suggesting ibuprofen is linked to more complications and more severe illness – although we don’t know that the ibuprofen itself is causing this, according to Paul Little, a professor of primary care research at University of Southampton.

Some experts believe that ibuprofen’s anti-inflammatory properties may “dampen” the body’s immune response.

Prof Parastou Donyai at the University of Reading says: “There are many studies that suggest ibuprofen use during a respiratory infection can result in worsening of the disease or other complications.”

The spreading of rumours has led to confusion

Worries over the use of ibuprofen appear to have surfaced in France, after Jean-Louis Montastruc, a doctor at Toulouse University Hospital warned on Twitter that: “In this period of coronavirus, it is necessary to remember the risk of complications of the NSAIDs in case of fever or infection.” 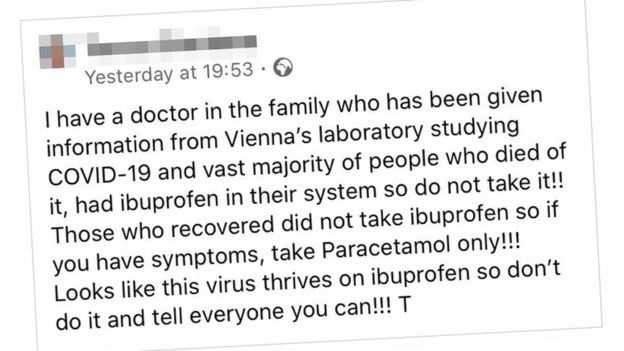 BBC NewsA subsequent tweet by France’s health minister, Olivier Veran, saying that anti-inflammatory drugs “could be an aggravating factor of the infection” was shared more than 43,000 times. But he also said people should consult a doctor before stopping taking them.

Other tweets are also being shared including one saying that ibuprofen “may cause severe cases of the disease, even in young and middle-aged adults with no underlying conditions” which has been shared more than 94,000 times on Twitter.

A lack of clear consensus on the issue from the medical profession has led to mixed messages and rumours spreading online, and the University of Vienna laboratory claim noted earlier seems to have taken on a life of its own in both English and German.

Twitter and Facebook posts – which seem to be cut-and-pasted and adapted by users – all claim to have a “doctor in the family” who has information from the Vienna lab that “the vast majority of people who died of Covid-19 had ibuprofen in their system”. Some of the posts go on to claim that coronavirus “thrives on ibuprofen”. There is no evidence that this is the case.

This online rumour also appeared on German-language WhatsApp as voice message and text messages. These messages typically claimed to be from a young mother saying that the Vienna lab had researched Covid-19 deaths in Italy and found that the majority had self-medicated with ibuprofen. The message offers no specific evidence to back up its claims, German aponet.de pharmaceutical news website says. “Such a pattern is typical of conspiracy theories,” it concludes.

Update: Here is the latest advice about travelling to Thailand during the coronavirus outbreak 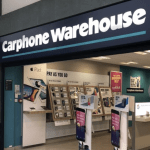