Home » Tourist rescued after THREE DAYS in a ravine

Tourist Rescued: At least 60 people, including soldiers, were involved in an operation to rescue an injured man from a ravine in Khao Laem National Park in Sangkhla Buri district.

The man, identified as 46-year-old Niphon Wongthap, spent two nights in the ravine after falling more than 12 metres down a hillside near Roi Wa waterfall on Monday.

He originally came with a group of five tourists who were hiking to the waterfall. The group parked their car at Tipuye village and started walking.

They initially expected villagers to pick them up at Kong Mong Ta village but Mr Niphon fell into the ravine before they arrived at the village.

Authorities were informed of the accident and tried to help him on Tuesday, but he had to wait until Wednesday before he could be rescued from the ravine due to weather conditions.

Soldiers from Surasi army camp in Kanchanaburi’s Muang district put Mr Niphon on a stretcher and took him to a helicopter waiting 2 kilometres away that took him to Sangkhla Buri Hospital.

An accompanying paramedic said the tourist had broke a leg and had head injuries.

The group of tourists were fined 500 baht each for trespassing in the park, according to park chief Thewin Meesap. Officers found no weapons on them, he added.

One of the tourists, Chuvej Pikulthong, said they accepted the penalty because they realised they were not authorised to go into the area.

Mr Chuvej and the two other men — Nonthawat Losiri and Mr Niphon — are freelance photographers, while the woman in the group, named Arporn Put-ake, is a teaching assistant 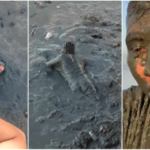 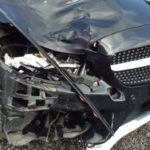