A TV chat show host has apologised for asking the mother of one of the boys trapped in a Chiang Rai cave if he’d spoken to her in a dream.

Facebook users condemned Phakkapong Udomkayarak of the Channel 8 show “Joh Praden” (“Hitting the Point”) for asking a question that could be interpreted as inferring the boy was dead and his ghost was contacting his loved ones. Phakkapong, a usually popular host on the terrestrial digital channel that also broadcasts as Channel 27 via digital TV tuner boxes, asked the question via a phone-in interview with the worried mum. He reacted to the criticism by posting a picture of himself on Facebook offering a wai on Wednesday and saying he was sorry his question had made people uneasy.

He extended his moral support to everyone involved in the search and expressed hope the 12 missing boys and their assistant coach would soon be found safe.

Man killed by own pickup in Prachin Buri 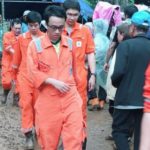