The grief-stricken father of 39-year-old businesswoman Thitima Tangwibulphanit, who was found murdered in a hotel in Bangkok’s Lad Prao district on Tuesday, has filed a request to freeze Thitima’s 14 bank accounts.

Amnuay Wichaichote, 67, said he believed his daughter’s murder might be linked to unpaid debts owed to Thitima by the key suspect as a hotel maid reported that she had heard people arguing about money around the time Thitima was killed.

Bundit said Bt200,000 of his older sister’s cash and gold ornaments were missing.

Meanwhile, a man resembling the 33-year-old suspect Assaya Chaipha, for whom the Criminal Court has issued an arrest warrant on a charge of Thitima’s murder, is believed to have been spotted on CCTV footage leaving a Cambodian hotel elevator with a male companion.

The bloated body of Thitima was found beside her bed at the hotel room where she was believed to have stayed for a month with Assaya, who was her aide. Her skull had been crushed, and a blood-stained baseball bat was found nearby.

Video from security cameras at the hotel where the body was found showed that Thitima and Assaya returned to the hotel at 10:41pm on July 26 but Assaya left the room alone at 1:55am on July 27. Thitima’s Mercedes-Benz E220 sedan, later discovered at Chanthaburi’s Pong Nam Ron border district, was held as evidence.

Thitima’s funeral prayers are being held until August 4 at Wat Bang Bua where the cremation will be held on August 5. 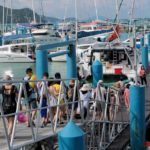 Chinese visits to Thailand to fall after deadly boating accident