Police have yet to make any progress in arresting a foreign man for stabbing a British national in Phuket earlier this month – with the victim and his girlfriend both not answering police calls or assisting the police in any other way, The Phuket News has been told.

Neil Goodwin, a 35-year-old expat resident of Rawai, was stabbed in the car park at the We Cafe restaurnat on Chao Fa West Rd on the evening of May 1 after arriving at the venue with his girlfriend, Sudarat Harnma.

Ms Sudarat accompanied him to hospital, where the pair were questioned by Capt Chatree Chuvichian of the Wichit Police.

At last report Wichit Police Chief Col Nikorn Somsuk on May 3 said, “He remains at the hospital until doctors decide he is ready to be discharged.”

However, that was the last time police heard from Mr Goodwin or Ms Sudarat, Col Nikorn told The Phuket News today (May 16).

“We have a problem. The British victim has not answered any calls by police for the past 15 days,” Col Nikorn said.

“He and his girlfriend are still avoiding police contact since they spoke with police at the hospital, as if they don’t want to talk to investigators,” he added.

“It is our job to find the man who hurt Mr Goodwin, but we need better information,” Col Nikorn said.

Due to the nature of the crime, police must investigate the incident and do their best to bring the attacker to justice, Col Nikorn added.

“But the footage is not clear, we are unable to determine anything about the suspect’s features from the images,” he said.

He added that Wichit Police do know the man’s name and nationality, though he declined to reveal that information publicly.

Also, despite having that information, Col Nikorn confirmed that his officers have not requested any assistance from Phuket Immigration about locating Mr Goodwin.

“We have not. We are doing our own investigation,” he said.

“My team is checking whether Mr Goodwin has a criminal record in Thailand because his behavior is weird,” Col Nikorn said.

“He was stabbed but he does not explain more information to us,” he added.

Col Nikorn declined to reveal any other information about the case, but assured his officers were continuing their investigation 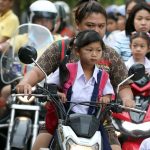