Home » No stress in Bangkok according to recent survey

No stress in Bangkok according to recent survey

A recent survey has found that Thailand’s capital, Bangkok, is actually one of the world’s least stressful cities to be based in.

Bangkok, along with Coconuts sister cities Singapore and Hong Kong, were ranked among Asia’s least stressful metropolitan areas, according to “Most and Least Stressful Cities 2017” data compiled by Zipjet — a London-based, dry-cleaning service company.

If their data analysis skills are on par with their fluffing and folding abilities (and thus to be trusted), Bangkok is one of the least stressful places to live in Asia, with an overall score of 6.19 (with 10 being the most stressful).

The analysis studies everything from a city’s density, unemployment rate, public transportation and security to air pollution, traffic, social services, purchasing power, and number of sunshine days a year.

While it’s placed near the top of the bottom third of the world ranking (104th place out of 150 cities), it’s actually one of the world’s top three cities when it comes to unemployment rate. Yep, most people in Bangkok have some sort of job.

Singapore comes out as the least stressful city in Asia, (and second-least stressful in Asia-Pacific if we’re including Australia). The Little Red Dot is in the top 50 with a low score of 3.52. Singapore also tops the rank by having the most efficient public transportation, among the 150 cities.

Meanwhile, Hong Kong lands at 74th thanks, in part, to its low crime rates.

On the other end of the spectrum, Dhaka, Bangladesh, was named the most stressful city in Asia. Manila, Jakarta and Kuala Lumpur, three fellow Coconuts cities, also found themselves near the bottom among Asian cities.

New questions to greet travelers flying to the United States 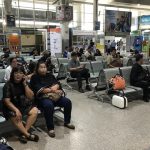 Time to return home for mourners