Finds of this scale by prospectors are known to happen a few times a year, experts say.

About three-quarters of the gold mined in Australia is produced in and around the Kalgoorlie region.

Mr Cook, who owns a shop selling supplies to gold prospectors, said the man detected the piece on some saltbush flats, about 45cm (18 inches) below the surface.

“He walked into my shop and showed me the nugget in his hand with a big smile on my face,” Mr Cook told the BBC.

“It just a bit bigger than a packet of smokes, and the density of it was incredible, so heavy.”

Smaller traces of gold are more common finds in the region, says Prof Sam Spearing, director of the Western Australia School of Mines at Curtin University.

“Along with the mines around, a lot of people go around as prospectors on the weekend, as a hobby. Other people do it on a full-time basis,” Prof Spearing said.

“Most of the gold found is in the less than half an ounce category, but they do find them fairly frequently.” 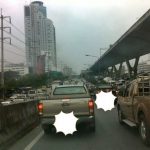 Pay traffic fines or your car will be banned!