Nightclub QuarrelSix youths, comprising four girls aged 16 and 17 and two men, have been arrested for the alleged assault of three rival youths, whom they had chased from in front of a nightclub in Chaiyaphum’s Mueang district to their apartment in the early hours of Friday, deputy provincial police chief Pol Colonel Thanawat Pakkhathanitsak said on Monday.

The group, armed with knives and guns, attacked the fleeing victims at their PB Apartment block in Tambon Nai Muang at 3am, in an incident that was captured in a video clip that has gone viral since Saturday, causing a stir among Thai social-media users over the daredevil nature of such a crime committed by youths.

The four girls, whose names were withheld due to their being under 18, were arrested along with two men – Phitsanu Wongsila and Sukhum Khamchaiyaphum, both 20.

Phitsanu allegedly also opened fire during the chase of the three victims.

The six suspects confessed to the assault against the youths, with whom they had had an earlier conflict at the nightclub that night, and claimed they had carried out the attack due to the influence of alcohol, Thanawat said.

The nightclub, where the two parties ran into each other and argued, was now being considered for a possible shutdown by related agencies, the deputy provincial police chief added, as the owner of the venue had previously been arrested for allowing patrons under 18 to enter the premises, and for selling alcohol to minors. 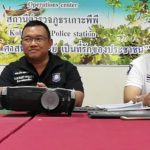