Hollywood star Arnold Schwarzenegger has said he will not press charges after being attacked at an event in South Africa.

The 71-year-old was talking to fans at his Arnold Classic Africa sporting event on Saturday when a man drop-kicked him from behind.

The attacker was restrained following the incident in Johannesburg.

However, on Sunday, Schwarzenegger said he would not be taking the case further, adding: “I’m moving on”.

The video footage, shared widely on social media, showed Schwarzenegger posing for photos and filming at the event when the man attacks him with a flying kick.

The Terminator star stumbles forward after the kick, while the attacker falls to the ground, where he is immediately restrained by a security guard.

The unnamed man was later handed over to police officers, event officials said.

Schwarzenegger tweeted to his more than four million followers: “I thought I was just jostled by the crowd, which happens a lot. I only realized I was kicked when I saw the video like all of you.”

In response to tweets from his fans, he said on Sunday he would not be pressing charges against the attacker. 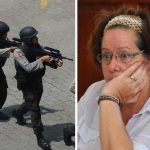