The spring schedule traditionally brings the very best boxing has to offer with Saturday’s showdown between Katie Taylor and Amanda Serrano one of the most important fights the sport has ever seen.

Slotting in a week after Tyson Fury’s heavyweight title victory over Dillian Whyte and a week before the return of pound-for-pound star Saul ‘Canelo’ Alvarez, it is quite simply one of the biggest match-ups that can be made today.

For the first time in the venue’s 140-year history, two women will headline a card at New York City’s Madison Square Garden on Saturday, with Taylor vs Serrano joining Rocky Marciano vs Joe Louis, Muhammad Ali vs Joe Frazier and Anthony Joshua vs Andy Ruiz Jr among the illustrious fights held at the hallowed venue.

Against a backdrop of Irish and Puerto Rican flags, undefeated and undisputed queen of her division Taylor takes on a seven-weight world champion in Serrano.

It is a true 50-50 contest, bringing together the two fighters widely considered to be the no1 and no2 pound-for-pound best in women’s boxing. Anyone with even a passing interest in the sport will be aware of how exasperatingly rare that is – you have to go back to the 2008 classic between Manny Pacquiao and Juan Manuel Marquez for the last time that happened.

‘It is a legendary fight, it’s pretty simple,’ says Chantelle Cameron, the reigning IBF and WBC super-lightweight champion said. ‘At Madison Square Garden we have two fighters who are legends in their own right and right at the top of the sport. It is the first of hopefully more undisputed in fights in women’s boxing this year.’

Taylor vs Serrano has demanded the media attention afforded to the most high-profile fights in men’s boxing with the Garden expected to be a sell-out on the night, promoted relentlessly by Matchroom chief Eddie Hearn with Jake Paul stepping in as Serrano’s benefactor.

It comes at a time when women’s boxing is in full flight, with Jessica McCaskill and Mikaela Mayer joining Taylor in becoming undisputed champions at welterweight and super-featherweight respectively in the last 18 months.

Closer to home, there are now four world champions from Great Britain, each with unification hopes of their own. Among those is Taylor’s former opponent Natasha Jonas, who has played her own role in the rise and rise of women’s boxing with this weekend’s clash encapsulating how the game has changed.

‘The boxing fans appreciate how good women’s boxing is at its highest level,’ Jonas said. ‘We always knew that, we just needed the platform. Now we have that. If you are a boxing fan, it doesn’t matter if you are male or female, you appreciate the art of good boxing. I don’t think there is a card now that doesn’t have at least one women’s fight on it. That is a far cry from the old days.’

Taylor, who holds a perfect 20-fight record having won everything there is to be won as an amatuer, was given perhaps the toughest examination of her career in the very same venue three years ago on the Joshua vs Ruiz undercard.

While it was the night she wrote her name into history by becoming Ireland’s first undisputed champion, the battle she shared with Belgian policewoman Delfine Persoon left some fight fans unconvinced after a brutal contest.

‘The Bray Bomber’ ended lingering doubts with a comprehensive victory in their rematch a year later and has rattled off four more victories since. But against such formidable opposition in Serrano, a woman who has lost just once in 44 fights with that one blemish coming over a decade ago, some of the Irish icon’s rivals believe she is on the decline and primed for a first defeat.

‘I just don’t think she has been the same Katie recently,’ Cameron continued. ‘She has slowed down a bit and isn’t the same fighter she was two or three years ago. Serrano hits hard, she is such a ferocious fighter and she throws a lot of body shots which I think will slow Katie down.

Serrano’s come-forward, aggressive approach has seen her score 30 knockout victories over the course of her incredible 13-year career. While Taylor is considered to be the most technically gifted female fighter of her era and perhaps of all time, that power could prove to be her undoing.

‘I just think that is all wrong for Katie. She can be dragged in, Serrano is a southpaw which will cause problems and she can punch. She is tough. I don’t think Katie will have speed over Serrano. She isn’t a massive puncher either.’

They are sentiments echoed by Caroline Dubois. While Taylor has ruled the lightweight division for the last six years, 21-year-old Dubois may be its future, having turned professional last year after a stunning amateur career with two pro wins to her name. Memories of that war with Persoon linger for Dubois, who believes Serrano’s physical advantages could take their toll.

‘I don’t know how long she [Taylor] intends to stay in the game,’ Dubois said. ‘I feel this is going to be a very difficult fight for her. It is going to be very hard; another Define Persoon fight for her, very physical and very demanding. How she comes out of that fight determines what she is going to do next.’

Ellie Scotney, the undefeated Londoner who picked up the WBA intercontinental super-bantamweight title earlier this year, also recalls a tough night for Taylor against Persoon.

While there has been plenty of talk about Serrano’s power and ability to brawl, Scotney believes her boxing abilities are being overlooked, suggesting a technical fight will ultimately serve Taylor better.

‘There is mutual respect there, no doubt,’ Scotney said. ‘Everyone has said this [Serrano’s aggressive approach causing problems] but I think the more technical the fighter is, which Serrano is, the easier night’s work it is for Katie.

‘I just think what we saw with Delfine Persoon, the patterns she used, they were unorthodox, and they were very hard to read. I think that is what Katie struggles with. I think where Serrano sets her feet and matches her in the skill department, that plays into Katie Taylor’s favour.’

With the eyes of the boxing world upon them, a classic is expected to unfold on Saturday and whether it produces the stunning one-punch knockout we saw last week at Wembley Stadium or an absorbing 10-round contest, fireworks are expected.

Jonas went the distance with Taylor last year and was on the wrong end of a unanimous decision, conceding her opponent nicked vital points in key rounds that may have proved the difference. The Liverpudlian, who has 14 fights under her belt, believes she fell short due a lack of championship experience – something she believes won’t be a problem for the hugely experienced Serrano.

‘I don’t think she [Serrano] stops her,’ Jonas predicted. ‘It will be a very close fight but I do think Serrano wins. Katie had experience over me at that level. When the rounds were close she was doing just enough to nick the rounds within the last 30 seconds.

‘I don’t think she will be able to do that against Serrano who has had 40-odd fights herself. She is not new to the game. She is at the top for a reason.’

Given the sheer scale of the fight, a rematch is already being discussed with Eddie Hearn teasing the possibility of a homecoming show back in Ireland, where Taylor has still not fought as a professional.

This summer could also bring another blockbuster clash between Savannah Marshall and American superstar Claressa Shields, while Cameron and Jonas will hope to secure unification fights of their own before the year is out.

Saturday’s history-making night in New York could be just the start. 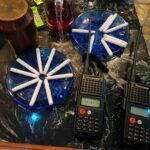 Philippines buries Swedish techs in the War on Sex