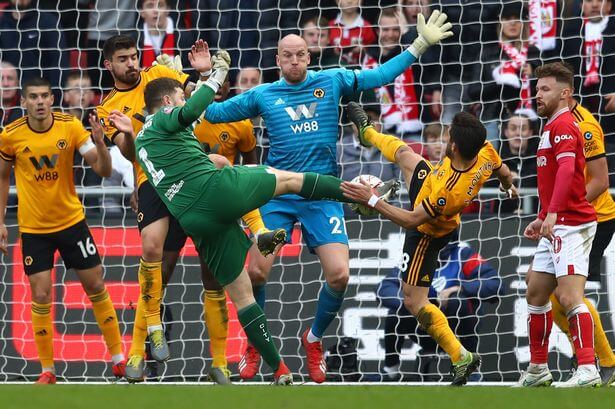 Emirates FA Cup Wins for Wolverhampton Wanderers, Crystal Palace, and Swansea City saw them advance to the quarter-final stage. In the Sky Bet Championship Middlesbrough swap places with Bristol City and move up to 5th.

Barclays Premiership teams Wolves and Crystal Palace wrapped their ties up in the first half with Bristol City, in particular, paying far too much respect for their opponents in that half. Portuguese forward Ivan Cavaleiro scored after 28 minutes after good work down the right by Matt Doherty who caused the home team plenty of problems during the first half.

City boss Lee Johnson made two changes at half-time bringing on Marlon Pack and Matt Taylor. They, and whatever Johnson said at half-time, seemed to shake things up for City who began to have more pressure and push Wolves back. But despite that Wolves never really looked in any danger with their back three, Wily Boly, Connor Coady, and Ryan Bennett, putting up a firm barrier in front of keeper John Ruddy.

Wolves are into the quarter-final for the first time since 2003 and as the third ranked team left in the competition, behind Manchester City and Chelsea or Manchester United who play tonight. They’ve proved their quality by beating Liverpool in this competition and Chelsea and Spurs in the Premier League. They’ve also drawn with both Manchester clubs and Arsenal. On their day they can be a match for anyone.

If you have any comments or questions please go to the following links. And it would also be much appreciated if you could like and share if you like. Thank you.

What does it take to be a Miss Universe?