No one was injured when a tanker with 15 tonnes of highly flammable LPG gas crashed into power poles and then flipped in the middle-road ditch in Prachin Buri early on Friday.

Fire engines rushed to the scene to be on standby for fear of an explosion.

Somsak told police that he was driving from a Rayong refinery to deliver the gas to Laos when he lost control, causing the truck to stray into the ditch and hit the power poles before overturning. 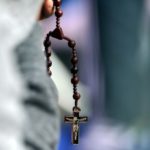 US journalist told to ‘act like a lady’ by police