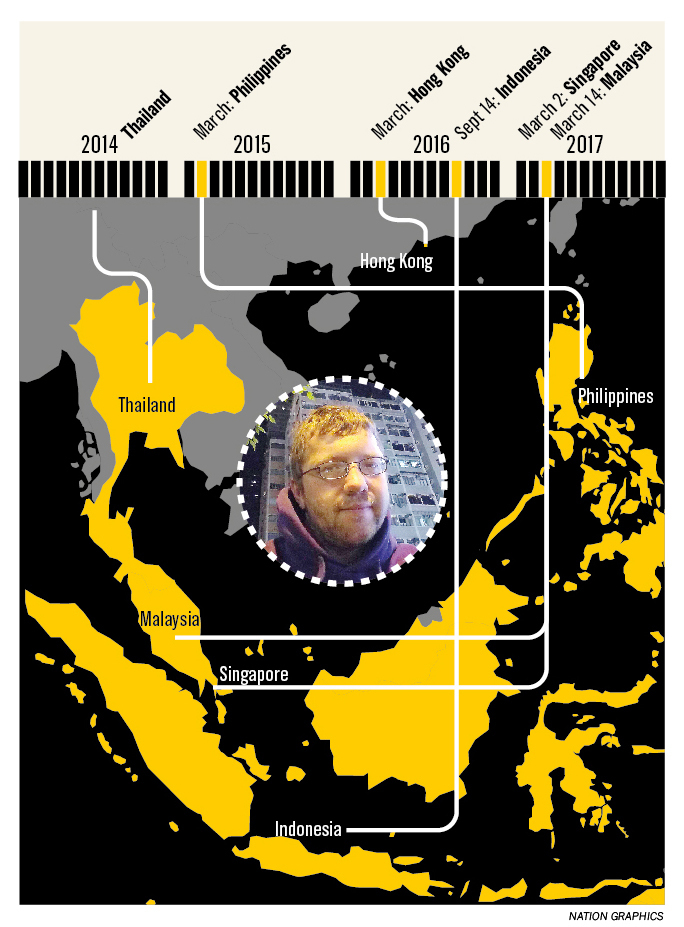 In 2014 hthe beggar used his swollen leg to exploit the sympathy of Thais to get money, but used it to support his extravagant life and shamelessly posted photos on Facebook.

Also known as “the party beggar with the big foot”, he is now in Kaula Lumpur after being seen in Penang. The Star online described him as a professional beggar and depended on the generosity of locals to fund his travelling and partying lifestyle.

The 32yearold German is said to have arrived in Malaysia on March 2 by train from Singapore.

His recent social media posts show him enjoying the nightlife, food and scenery of Bukit Bintang and Penang island.

“Time for cheaper girls and beach,” he wrote in one post depicting his journey from Kuala Lumpur to Penang.

Holst suffers from a rare form of localised gigantism called Macrodystrophia lipomatosa that has caused his left leg to swell severely. He has been seen begging on the streets of Thailand, Philippines, Hong Kong, Indonesia, Singapore and Malaysia.

His Facebook page is filled with photos bragging about his exploits in these countries.

University of Nottingham student Lauren Sula, 23, warned Malaysians via the Backpackers Buddies Malaysia Facebook group on Saturday to stay away from Holst.

“He takes advantage of people all over Asia by begging for money, which you may at first think is to help fund his healthcare for his disability,” she wrote. “However, he brags on his personal Facebook page about how he’s staying in expensive hotels, eating in nice restaurants and spending endless money on prostitutes.”

Several Malaysians told The Star Online that they had seen him begging around the city on Sunday.

“I saw him begging on the covered walkway near the Imbi monorail station at about 3pm. He sat on the floor and was waiting for people to give him money,” postgraduate student Muhammad Afi, 28, said.

Eliza Hamdam, 38, said she had twice spotted Holst. “One evening last week, he sat and begged with a small transparent plastic bowl in Bukit Bintang where a lot of homeless people are often seen,” she said.

She said she saw him again on Sunday night wandering around Jalan Alor. “Although one of his legs was swollen, he walked normally,” she said.

In 2014, he claimed his passport and cash were stolen during his trip to Thailand. He attracted a lot of sympathy, partly because of his disfigured leg. A German foundation later provided him with a hotel room while he waited for a new passport, he then took a taxi to Pattaya where a taxi motorcyclists claimed that he showed him more than Bt40,000 when they recognised him.

“He also gave us money, telling us to get him some beer and some girls for him to sleep with,” one motorcyclist said on condition of anonymity. Holst was detained and later deported.

In 2015, he reappeared in the Philippines. He announced in his Facebook page that he was in Angeles City.

In 2016, he shared pictures of himself dining in McDonalds and other local restaurants. He also posted a picture of himself going to a betting station.

In other posts, Holst said he has spent nights at Hong Kong’s red light district looking for prostitutes and bragged he was taking them to hotels. He said he went to the Thai consulate in Hong Kong and joked that they might allow him back to Thailand.

In September of the same year, he was arrested in Surabaya in Java as he partied with girls using the money he got from panhandling.

Before being arrested, he was spotted at a traffic light in Tabanan, Bali, and a video of him went viral on social media.

This year, he posted in his Facebook page that he was in Singapore and then he was spotted in Malaysia. 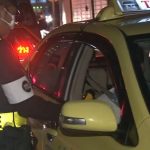 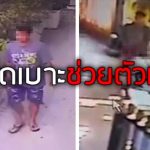 Come on mate, get a room! CCTV catches pervert having sex with motorbike