After a much-publicized car crash as he was driving out of a stately home in eastern England last month, Prince Philip has decided to give up his driving license. The official enquiry into the crash is ongoing.

The 97-year-old spouse of Queen Elizabeth was involved in a car crash when he was driving out of the 20,000-acre (8,093-hectare) Sandringham estate in the east of England in January.

“After careful consideration the Duke of Edinburgh has taken the decision to voluntarily surrender his driving licence,” a statement from Buckingham Palace announced on Saturday.

An investigation into the crash has been passed to the principal public prosecuting agency for conducting criminal prosecutions in the UK: “The investigation file for the collision has been passed to the Crown Prosecution Service for their consideration,” Norfolk police said. The CPS then announced: “We review each file carefully before a decision is made and will take this development into account.”

The accident had involved the prince’s Land Rover Freelander and a Kia car with two women and a baby on board. The baby was unhurt but the two women were treated in hospital, one of them for a broken wrist.

There is no upper age limit for driving in the UK, although drivers are sent a form to renew their license when they reach the age of 70. Then, drivers have to reapply every three years for a permit. 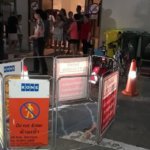