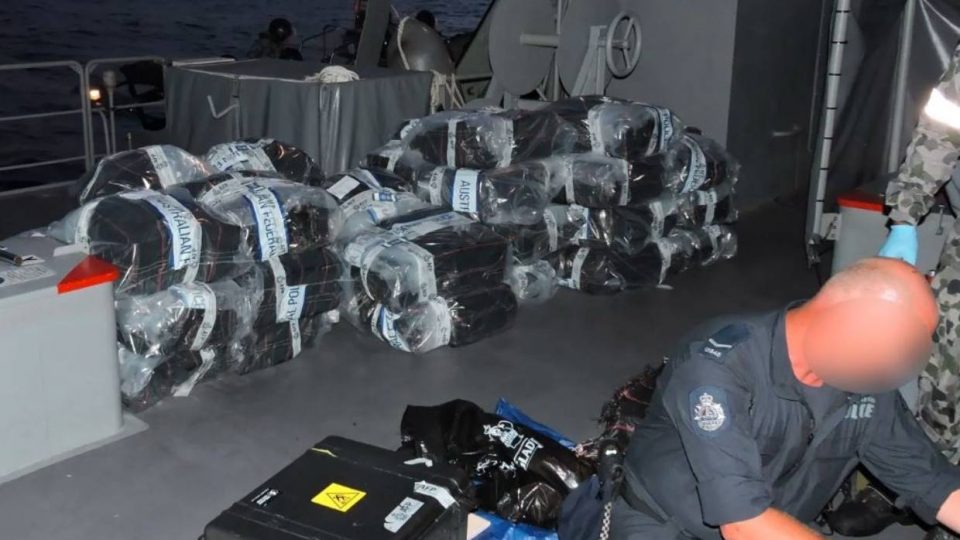 It was meant to be third time lucky.

Bobbing just 370 kilometres off the east coast of Australia in a yacht laden with 1.42 tonnes of cocaine, they were almost home.

After two failed voyages over two-and-a-half years they had finally sourced the illicit treasure worth almost half a billion dollars; the culmination of a plan hatched between two convicted drug smuggler cell mates in an Australian prison years earlier.

From New Zealand to Fiji, Tahiti, Solomon Islands, Micronesia, Polynesia, even Chile, the 13.3-metre Elakha yacht had served them well.

The vessel had been purchased by New Zealander Hamish Thompson following his release from jail in 2013.

Thompson was one of four men who spent the better part of three years planning the commercial importation and pay day was coming. But so were the Australian Federal Police.

A team of officers had monitored almost every step of the attempted importation through a years-long covert operation prompted by the $140,000 purchase of the Elakha in the convicted drug smuggler’s name.

Under the cover of darkness Maritime Border Command personnel boarded the Elakha shortly before midnight on February 2, 2017.

More than three years later two 66-year-old men have been sentenced to life in prison, their two co-conspirators to a combined 51 years, for what remains the largest cocaine seizure in Australian history.

When authorities boarded the Elakha it was the culmination of a lengthy investigation by federal police and international authorities. 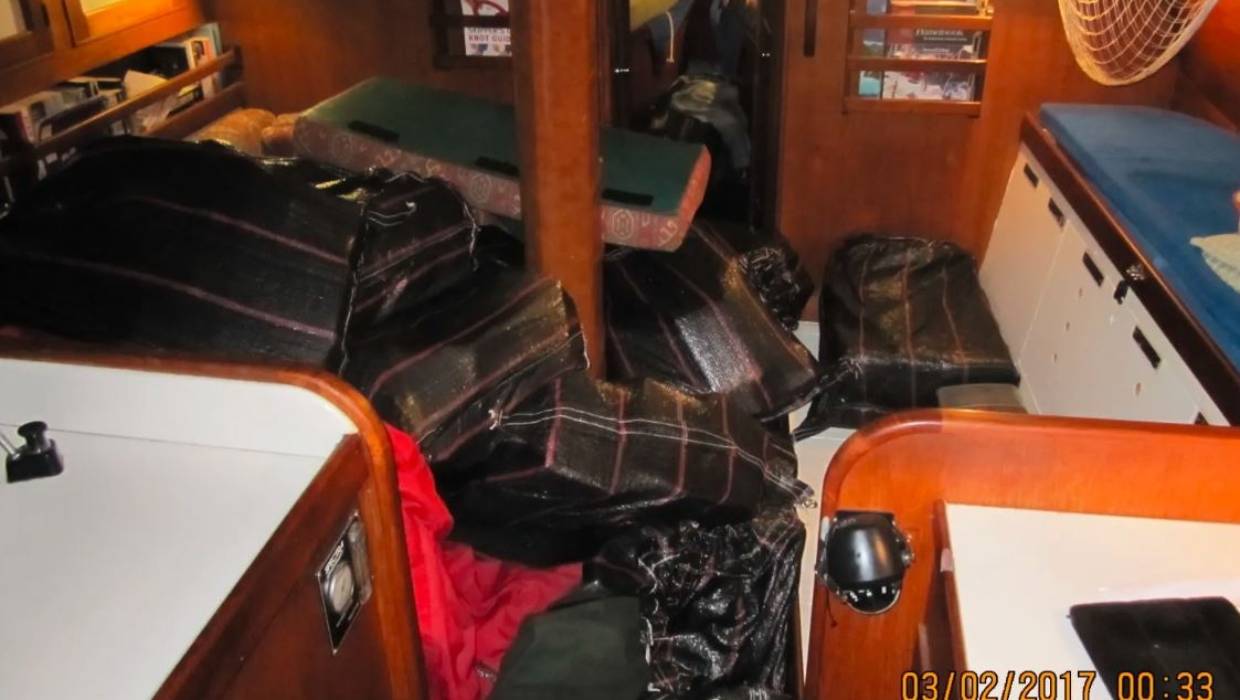 The AFP-led Operation Armour was launched in August 2014 to investigate a conspiracy between six people to import a commercial amount of cocaine by sea.

The men were connected through terms of imprisonment served in various NSW prisons between 1999 and 2013.

Two others, Valentino Fries and David Wren also faced a trial last year but were found not guilty.

A mariner, Thompson wasted little time getting back on the water after serving 13 years for a large maritime cocaine importation in 2000.

Unbeknownst to the then 59-year-old, he was considered a “known entity” by New Zealand Customs following his incarceration, meaning the purchase of the vessel in his name did not go unnoticed.

New Zealand authorities were soon aware Thompson was planning a journey in the Pacific Ocean while in contact with Australian associates like Geraghty, also a formerly convicted smuggler with whom he had once shared a cell.

“These two principals already had a significant history for importing drugs, so NZ Customs made contact and we started sharing intel across the Tasman to start putting the pieces of the puzzle together,” said AFP Investigations Commander, Northern Command, Andrew Donoghoe.

After intercepting a series of “cryptic” phone calls between them, the AFP confirmed “something was being planned.”

Investigators conducted more than two years of surveillance over those linked to the conspiracy, led by Geraghty and Thompson.

Telephone intercepts and other covert videos, photos and devices were monitored in real-time, revealing the evolving plan to source, obtain and deliver the cocaine to Australia.

The final brief of evidence tendered to the court included 5800 individual files.

On Friday the court heard the single conspiracy was made up of three separate attempts between January 2014 and February 2017, two of which failed.

The third attempt, while successful in obtaining the drugs, was frustrated at the final hurdle by the intervention of authorities.

During a combined sentencing on Friday the four men sat together in the Downing Centre District Court to learn their fate.

With the potential to “saturate the Australian community,” the quantity of the drug and the threat it posed to the community “virtually overwhelmed all other factors,” Judge Paul Zahra said upon sentencing Geraghty and Thompson to life, with non-parole periods of 25 and 22 years.

Again, the plan failed and Geraghty facilitated a new arrangement with a contact he had in the United States. Between the conspirators there was talk of “Mexicanos”, learning “how to sail,” and bikie gangs moving “four hundred kilos of coke a week.”

Geraghty, who took on a “managerial role”, would succeed in lining up a commercial quantity of cocaine on credit, telling the conduit in an intercepted phone call that the market in Australia was “just out of control … we’re talking super super money.”

On the Elakha the group installed satellite communications and used encrypted Blackberries, often struggling to operate the technology. They used coordinates to plot their journey around the world applying code words like “FJ1” for Fiji, “SA1” for South America.

“The people we assign to these investigations have to be really tenacious … we’re talking 12 to 18 months before you start to establish a picture of what the criminality is,” Commander Donoghoe said.

Police believe the Elakha was eventually loaded with the drugs by a “mother ship” that it met in the South Pacific Ocean in January. Had their plan succeeded, Geraghty and Willcox would have used a cruising motorboat from St Georges Basin to meet the Elakha at sea and bring the cocaine back to land.

They never gave up

On the first attempt in August 2014 Thompson set sail from New Zealand to Tahiti and then Fiji, intending to meet a mother ship.

However, an “unknown issue” meant the intended collection did not occur, police said, and the Elakha was forced to return.

Plans were quickly launched for their second attempt. Like the first voyage, it would largely be funded by regular cash and Western Union transfers from Majdalawi.

By the time Thompson set off in April 2015, he was headed for a location off the coast of Chile, first travelling through the Solomon Islands, Micronesia and Polynesia. The mission failed.

Still, the group never gave up, and in April 2016 Willcox embarked on a trip to Vietnam at the request of Geraghty to secure the location details for the final attempt to obtain the drugs at sea.

“They had purchased the Elakha, fitted it out, done two voyages … so each time they had a setback, they just recommitted. They were never going to stop.”

On Friday Judge Zahra said, despite defence submissions made last year and through the trial, he had found Geraghty and Thompson operated together “at the top of the hierarchy”.

He said he did not accept earlier submissions by Geraghty’s defence that his contact with the Elkaha and those upon it was in fact “virtually non-existent” towards the end of the conspiracy.

During the trial last year crown prosecutor Sean Flood told the court the members of the group were “effectively behaving like a transport company, putting themselves out there to be available” to transport the drugs using the Elakha.

He said the crown case was not that the group were “going to get the whole amount” garnered from the importation, but that they would be paid on commission, pointing to conversations covertly recorded in a vehicle in which the offenders discussed “10 per cent” being their ultimate reward, which Judge Zahra accepted.

As they received their sentences, the group showed little emotion, but hugged and shook hands with their legal teams before being taken into custody.

For Geraghty, Thompson and Willcox, all aged over 65, they will likely spend the rest of their lives in jail, each eligible for parole in 2041, 2039 and 2033 respectively.

Majdalawi blew a kiss to a large group of family supporters as he was taken from the court. He will be eligible for parole in 2033. 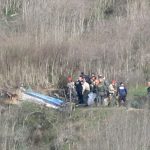 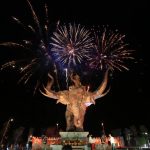