‘Racy’ Poster: After criticism from academics and on social media over head and shoulder photos of former cheerleaders in a recruiting campaign, the Thammasat University Cheerleader Club has said it was part of a Unicef campaign. 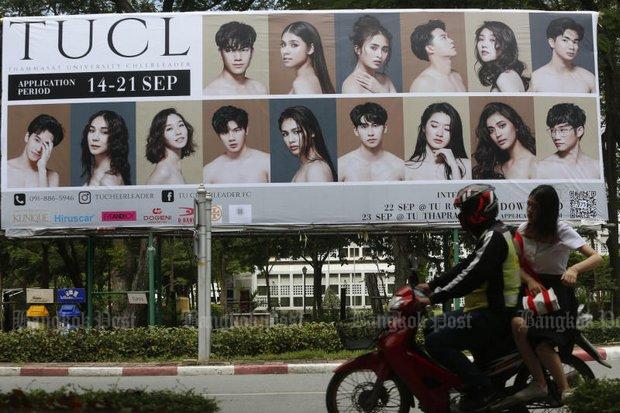 The United Nations children’s charity produced its U-Report to amplify the voices of young people in developing countries.

The photos, used on billboards and social media, encouraged students of both genders to apply for cheerleader positions was described as inappropriate for showing bare shoulders and being “racy”, depicting cheerleaders as sex objects.

The club said the campaign was part of a U-Report “My Body, My Opinion” project which started in July.

The shots were meant to challenge the assumption that cheerleaders were selected on their appearance, the statement said.

The campaign said that regardless of appearance, height and shape, anyone with self-confidence, determination and self-esteem can be a cheerleader and be part of the team.

The statement also confirmed that the photo shoot ensured protection for the 72nd cheerleading squad with the female members wearing bodysuits and trousers during the photoshoot.

The club also on Friday afternoon removed the billboards with such photos out of its campus to end this issue.

Volkswagen to end production of iconic Beetle cars in 2019