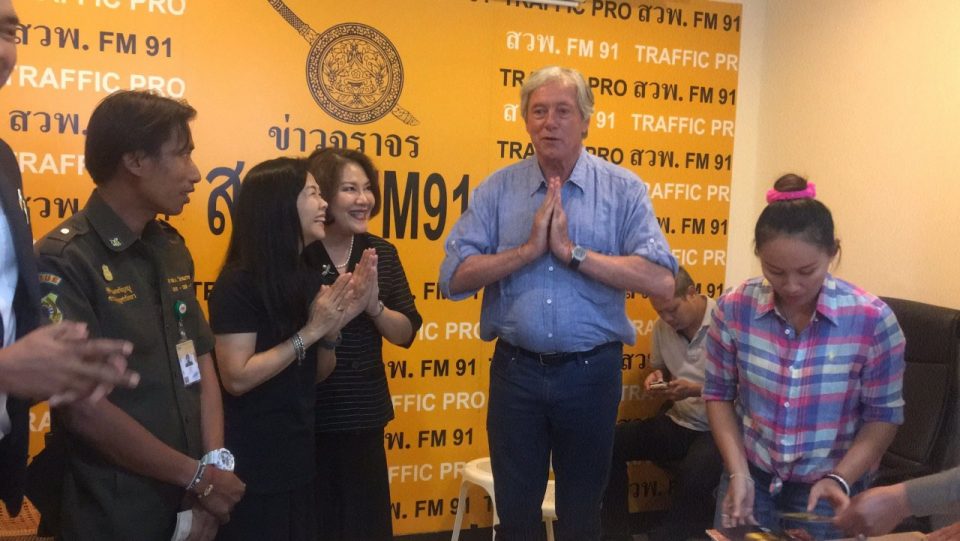 A taxi driver from Si Sa Ket on Tuesday returned a handbag containing some Bt360,000 in banknotes to a Swiss businessman at a ceremony held at FM91 radio station in Bangkok.

Sarawut Boonsattha, 39, officially handed over the bag to Alain Raymond R Bordier, 75, at an event witnessed by Jaiton Sriwangpol, an executive of the station.

Last Wednesday, after finding that the bag had been left by a passenger on the back seat of his cab, Sarawut went to the radio station to seek help in tracing the owner.

Sarawut said he had driven a foreigner from Soi Sukhumvit 13 to the Suvarnabhumi rail link station and, after later spotting the bag in his cab, decided to drive to FM91 radio station to seek help.

Bordier said he at first thought he had left the bag in his room, so he called his Thai wife to check, but she was unable to not find it.

Fortunately, the radio station later contacted him to tell him that his bag and its contents had been found.

The Swiss, who gave Bt20,000 to Sarawat as a reward, said he was lucky that his bag had wound up being found by a good, honest man.