Jayson Hurrell, 28, was stabbed in the back and punched to the face while he lay on the floor trying to protect his partner from the late night attack.

Jayson and girlfriend Kanchana Smith, 26, were approached in a kebab shop in Southend Essex by two men who allegedly began calling her a ‘lady boy’ and asking ‘how much she charged’.

After the kebab shop assistant asked the men to leave, Jayson stepped in to defend Kanchana before being attacked, leaving him dripping blood from his back.

Jayson from Southend-on-Sea said: “We were just trying to get a kebab after we had been out and  these two guys started saying nasty things to my girlfriend.

“Because she’s Thai they were calling her a lady-boy and asking her how much she charged. 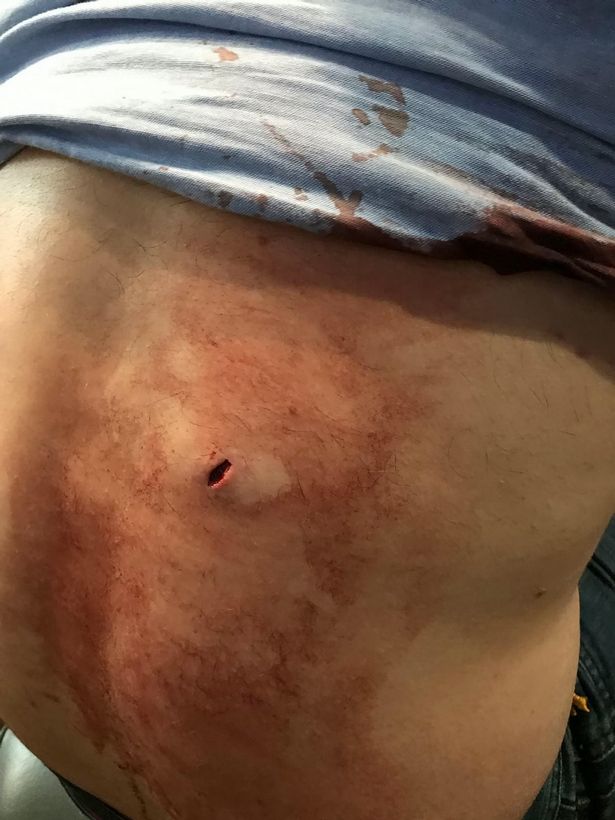 “The shop owner kicked them out and had to go outside to stop them coming back so I went out to help him.

“That’s when this big guy punched me in the face and broke my nose.

“I fell to the floor and I think that is when the smaller guy ran round and stabbed me in the back. I didn’t realise at the time – I didn’t even feel it.

“But after they ran off, we went back into the takeaway and my girlfriend noticed my back was wet and there was a lot of blood.”

Shop worker Jayson has added that the attack on the evening of November 29 has left him and heath spa worker Kanchana traumatised.

He added: “I am still in shock and my girlfriend is trying to stay strong. We were not expecting to be attacked like that that night.

“I am quite scared to leave the house now unless it’s for work but my manager has said I need to take time off.

“I feel like I have been left traumatised – I’m more aware of everything around me.

The pair say they are now scared to leave their home in fear of being attacked again.

Jason said: “When I do go out, I keep thinking ‘I wonder if he’s got a knife’ because of what happened.

“At the time, I didn’t really think about my actions. I just reacted and wanted to protect my girlfriend.

“But knife crime just seems to be everywhere now.

“Four years ago, my good friend was was murdered and nothing seems to have changed – it’s seems it’s only a matter of time before you get stabbed.

“Nobody is listening but this is just proof that knives are so destructive and something needs to be done.

“I think it will be a while before I go out in the town centre again because I just don’t feel it is safe anymore.”

An Essex Police spokesman said: “We are investigating following an incident where a man was assaulted in Southend.

“A man in his 20s was punched in the face and suffered a stab wound to the back in Clifftown Road at around 12.10am on Thursday, November 29.

“A 33 year-old man was later arrested on suspicion of GBH, ABH, and obstructing a police officer. He has been released on bail until December 19.

“An 18 year-old man was arrested on suspicion of ABH and GBH but has been released without charge.”