THERE’S SOMETHING very relaxing about travelling on a train. True, it takes a little longer, but anyone wanting to take a day trip from Bangkok to the coastal town of Phetchaburi this summer, will be rewarded by a relatively hassle-free journey with fabulous views of lush fields and a rare chance to observe the local life.

Famous for its unique culinary delights made from jaggery palm sugar, this southern province boasts tranquil pristine beaches, ancient temples, historical sites and old communities dating back to the glorious days of the Ayutthaya period.

The 911 Special Train runs from Bangkok’s Hua Lamphong station to Hua Hin’s Suan Son Padipat Station on weekend, with a stop at Phetchaburi.

Available every weekend as well as on national holidays, the new eco-cultural tour programme “Chom View Rot Rang, Tiew Tang Rot Leng” (admiring a view from a train, travelling by tuk tuk) has been put together by the Tourism Authority of Thailand, the State Railway of Thailand and local residents and is part of the Amazing Thai-Teh campaign. The first 1,000 visitors can take advantage of a free tuk tuk service with knowledgeable driver guides to explore the provincial town.

Arriving at Hua Lamphong station early on a Saturday morning, I board the 911 Special Train for the three-hour journey on the Bangkok-Suan Son Pradipat route. The 911 is scheduled to depart at 6.30am and at first it seems that will run on time. But just a few minutes later, the 100 or passengers of whom I am one are told to disembark and watch helplessly as our train is towed away, apparently with a technical problem. We are left high and dry for the next hour, with no update on when or even if we will be leaving.

Wat Phra Pathom Chedi is a popular stopover for travellers.

Our train tour eventually gets underway at 7.55am and I find myself relaxing in the air-conditioned second-class coach. It takes almost an hour and half to reach Nakhon Pathom station, where we are invited to disembark again, though this time to explore.

Located a short distance from the station, I walk through the morning market, where local vendors are offering street food and sweet delights. At the end of the street is Wat Phra Pathom Chedi, home to Thailand’s largest Lanka-style bell-shaped chedi built in 1853 to enshrine the Buddha’s relic.

Back at the station, the conductor rings the bell to indicate the train will soon be leaving. The vendors are unfazed though, continuing to serve snacks to the hungry tourists until the very last minute. An hour later, we pull into Phetchaburi station where more than 10 tuk tuks are waiting to take us on a sightseeing tour.

A five-minute drive from the Phetchaburi station is Phra Ramrajnivet Palace, built in 1910 as the summer retreat for King Rama V.

Inspired by Kaiser Wilhelm’s castle in Germany, this luxury two-storey mansion originally named Wang Ban Puen is considered one of the masterpieces of German architect Karl Siegfried Dohring. It boasts a magnificent European design with high-ceilinged rooms and floors covered with Italian marble.

Occupying 349 rai, the construction was completed in 1916 in the reign of King Rama VI and in 1918 it opened to welcome royal guests. The ground floor has the Throne Hall and a dining room with yellow glazed tile walls overlooking the garden. German-style wrought iron embraces the doors and windows, which offer a view of a classic sculpture of Poseidon and the sea beyond.

Covered with green glazed tiles, a beautiful double spiral staircase takes visitors to the second floor, which is home to the queen’s chamber, a spacious study room and veranda where the royal family would appear to the public. The highlight is the King’s chamber with its oil paintings and an elegant bathroom with a vintage tub and water heater.

Wat Mahathat Worawihan has been recognised for its ancient murals and splendid stucco works.

Not far from the summer palace is Wat Mahathat Worawihan, famous for splendid stucco works that showcase Phetchaburi’s first-class craftsmanship. Built in the Dvaravati period, this ancient temple houses the towering five-tiered, corn-cob shaped stupa in a mixture of traditional Thai and Khmer styles.

Based on Mahayana Buddhism beliefs, this stupa is constructed to resemble Mount Meru – the centre of the Buddhist universe – and contains relics of the Lord Buddha brought to Siam from India. The main hall boasts murals created by such Phetchaburi masters as Kru Infahsaeng depicting the way of life in bygone days.

Thailand’s past political conflicts are remembered elsewhere in the temple. A stucco sculpture of MR Kukrit Pramoj, who served as a prime minister between 1975 and 1976, and holding the base of the sacred Ayutthaya-style Luang Poh U-thong Buddha on his shoulders, stands proudly in the small hall. The sermon hall, meanwhile, has elaborate pediments adorned with stucco works that portray university students fighting with armed soldiers on October 14, 1973 and May 17, 1992.

Shophouses on the banks of Phetchaburi River are adorned with street art.

Standing on the banks of Phetchaburi River, the old market has long been a popular dining and shopping venue for local residents and tourists. Colourful street art covers the walls of the shophouses lining the narrow alleys, illustrating everything from daily life to a litter of cute kittens and a map that shows places to eat and visit.

The old market offers a variety of local delicacies and desserts prepared to traditional recipes.

I find refuge from the summer heat in Mae Orn, a 60-year-old restaurant offering khao chae. Said to be the best in town, it serves the parboiled rice immersed in ice-cold jasmine-scented water with shrimp paste balls and glazed Chinese turnips. Next door is Cheng Yi Seng, famous for khanom pia, the Chinese pastry filled with mashed taro, gourd and salted egg yolk.

After lunch, we climb back into the tuk tuks and head to Wat Yai Suwannaram. Built in the late Ayutthaya period, its main hall boasts 300-year-old murals portraying the Jakata tales. Another highlight is a red teak pavilion that was once part of the Grand Palace in the Ayutthaya Kingdom. It’s furnished with refined woodwork and home to an ancient gold throne that was used to enshrine part of the ashes of the late King Bhumibol Adulyadej in the royal cremation ceremony.

The last stop is Wat Phra Phut Saiyat located to the southeast of Khao Wang. Left abandoned for several decades, it was restored on the orders of King Rama IV and a main hall was built to shelter a 43-metre-high statue of the holy 400-year-old reclining Buddha.

The day trip is almost over at 5, I board another train 912 to return home to Bangkok hoping that we won’t be delayed and that my window seat will offer me the chance to watch a beautiful sunset.

Tickets are Bt120 for a third-class seat and Bt240 for second-class. Make a reservation by calling 1690 (the State Railway of Thailand). 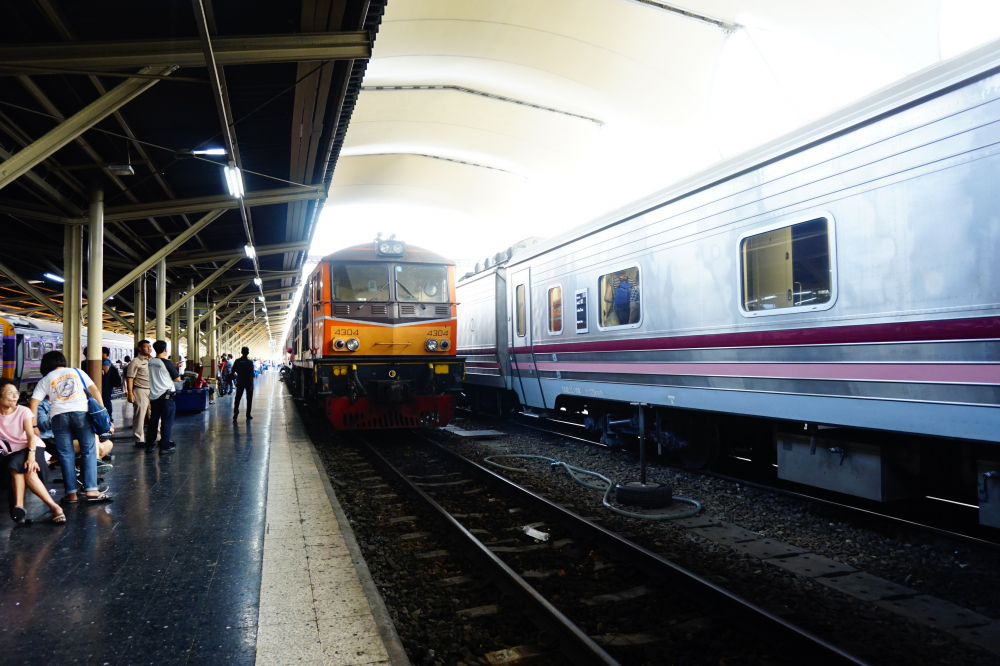 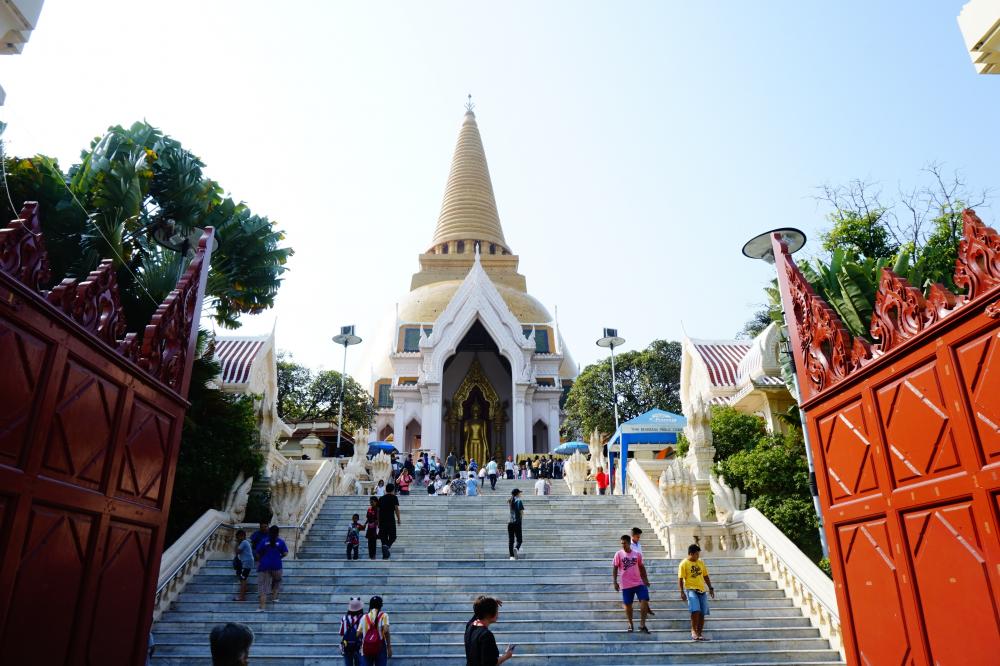 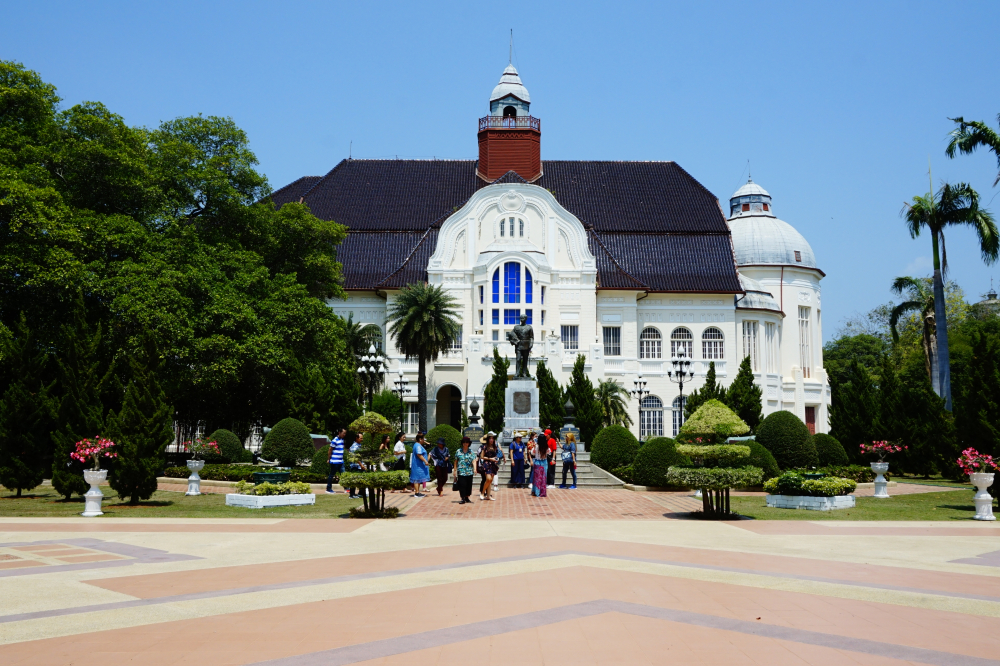 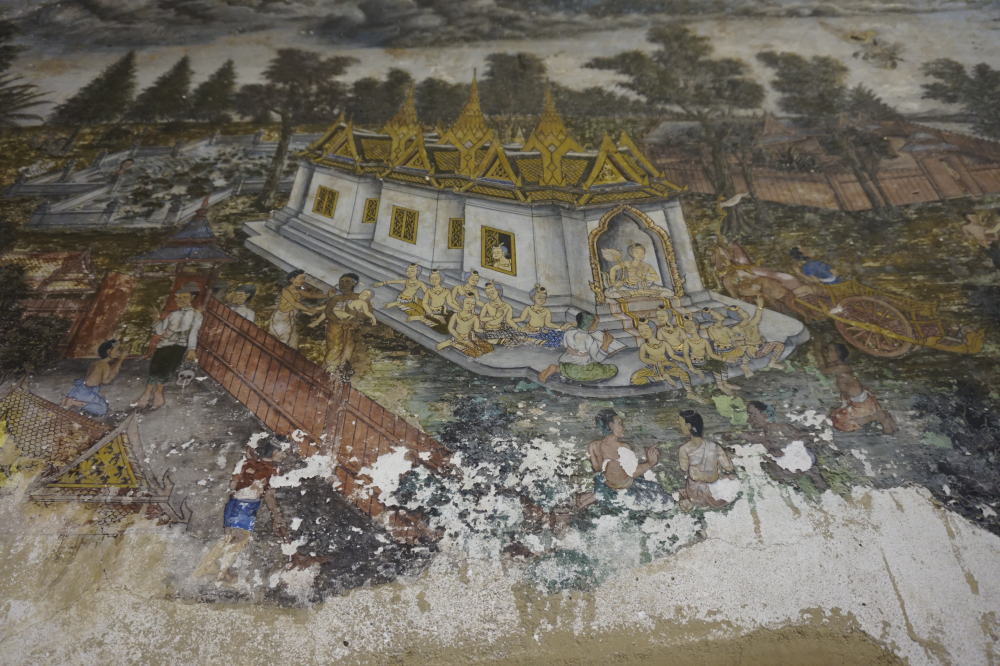 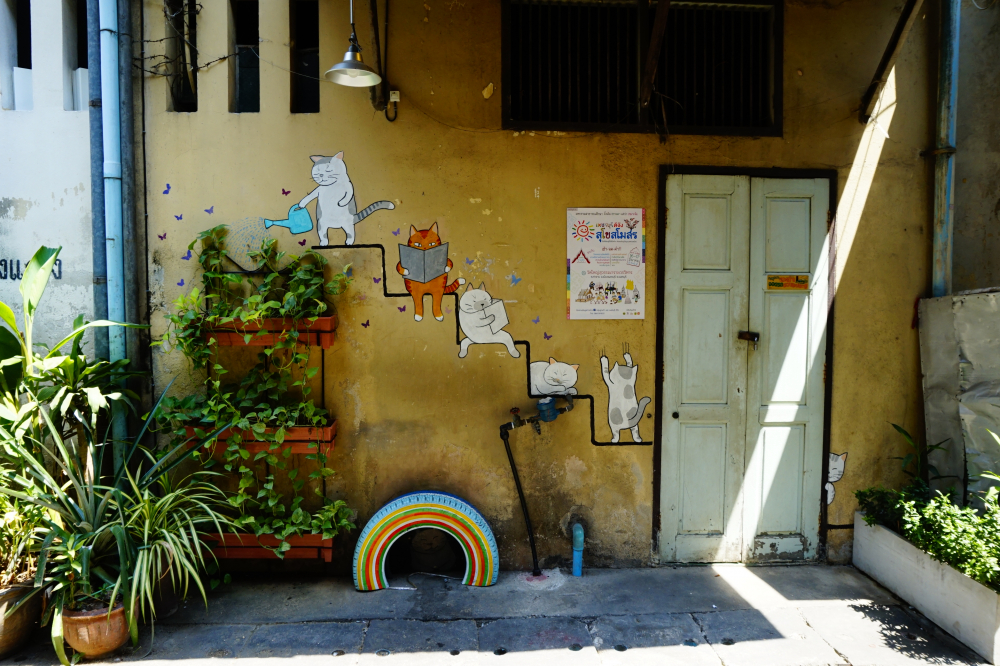 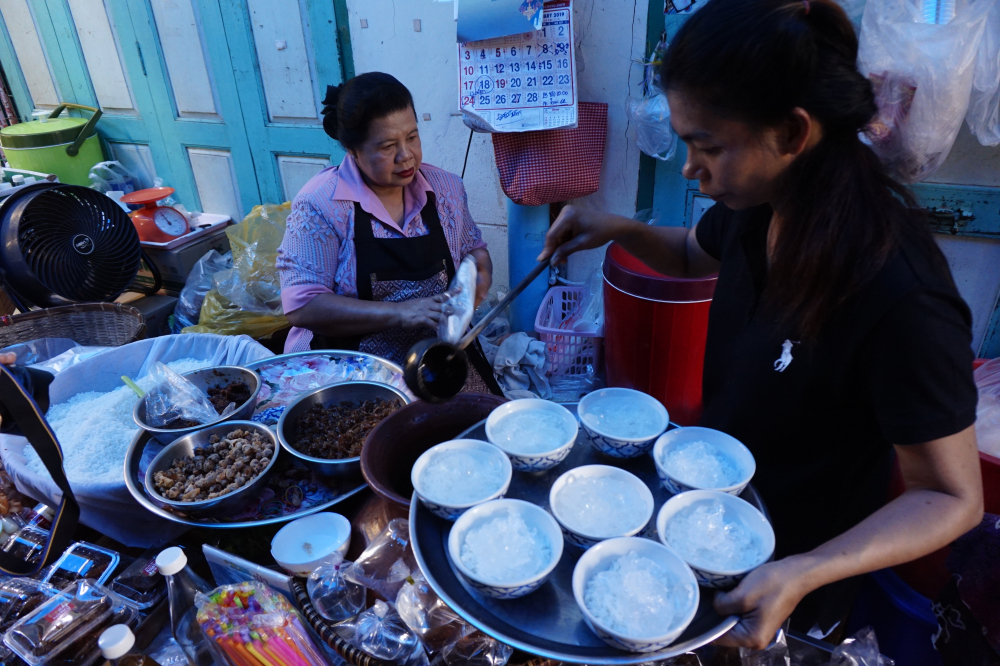 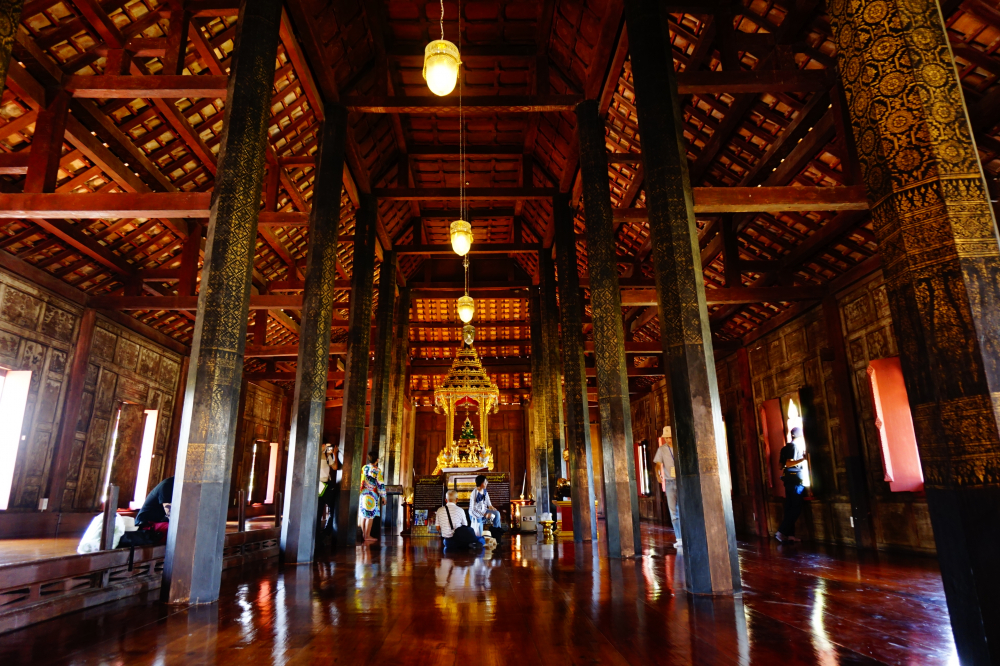 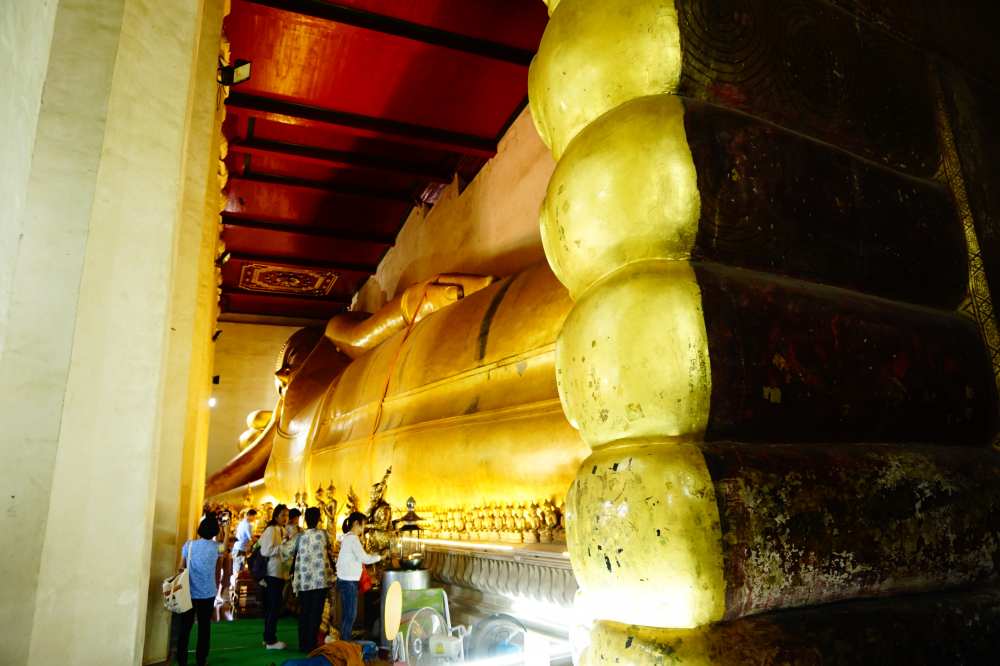 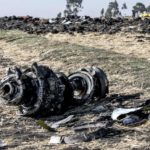