Home » Russia warns WWIII would be ‘nuclear and destructive’

Russia’s foreign minister Sergei Lavrov has warned a third World War would be ‘nuclear and destructive’.

It echoes similar comments he made to the UN security council yesterday, which sparked a mass walk-out from diplomats all over the world.

Western Intelligence officials believe Russia wants to topple the democratically-elected government in Ukraine and install its own puppet leadership.

Explaining why they staged the walkout, Canadian Foreign Minister Melanie Joly said: ‘Minister Lavrov was giving his version, which is false, about what is happening in Ukraine and so that’s why we wanted to show a very strong stance together.’

Ukraine has put up a fierce resistance which has been credited with stalling Moscow’s advances after it invaded last week.

The Ukrainian government has accused Vladimir Putin of perpetrating a ‘genocide’ after reporting homes and a hospital had been damaged in a missile strike.

There was outrage on Tuesday when explosions erupted around Kyiv’s 1,300ft TV tower close to the country’s Holocaust memorial site.

Five people, reportedly a single family walking together, were burned alive in the blasts.

The memorial at Babi Yar, a ravine in Kyiv, is where nearly 34,000 Jewish people were killed within 48 hours in 1941 when the city was under Nazi occupation.

After the attack, President Volodymyr Zelensky tweeted: ‘To the world: what is the point of saying ‘never again’ for 80 years, if the world stays silent when a bomb drops on the same site of Babyn Yar? At least 5 killed. History repeating’.

There are also fears of another nuclear disaster on the scale of Chernobyl if fighting breaks out around Europe’s largest power plant.

The huge nuclear installation at Enerhodar is being protected by staff who have blockaded the road.

Video from the scene showed vehicles and barricades at the entrance to the city, with crowds waving Ukrainian flags ready to meet Russian troops.

Invading forces are close to the area, around 140 miles from the city of Kherson, which the Russian ministry of defence claimed to have captured today.

The prime minister once again rejected Zelensky’s calls for British forces to actively join the resistance, warning it would trigger a wider war with Russia.

‘I think for any Nato member to get involved actively in conflict with Russia is a huge step which is not being contemplated by any member,’ Mr Johnson stressed during a press conference against the backdrop of armoured vehicles, at the Tapa military base in Estonia.

‘When it comes to a no-fly zone in the skies above Ukraine we have to accept the reality that that involves shooting down Russian planes … that’s a very, very big step, it’s simply not on the agenda of any Nato country.’

In an earlier visit to Warsaw, Poland, a Ukrainian journalist who fled over the border made an impassioned plea for Mr Johnson to assist with the request.

Daria Kaleniuk, the executive director of the Anti-Corruption Action Centre civil society organisation, said: ‘Nato is not willing to defend because Nato is afraid of World War Three, but it’s already started and it’s Ukrainian children who are there taking the hit.’

Mr Johnson apologised as he ruled out the move, having blamed Mr Putin’s regime for ‘barbaric and indiscriminate’ violence against Ukrainian citizens.

US President Joe Biden has also previously warned that ‘Americans shooting Russians’ would lead to another world war.

Western nations have instead supplied Ukraine with weapons and money and imposed a raft of sanctions on Moscow to ‘cripple Putin’s ability to finance his war machine’.

More measures are expected to be announced in the coming days.

Meanwhile, the chief prosecutor of the International Criminal Court said he plans to open an investigation ‘as rapidly as possible’ into possible war crimes and crimes against humanity in Ukraine. 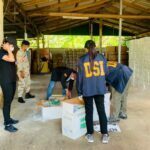 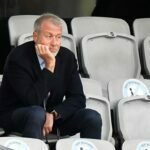