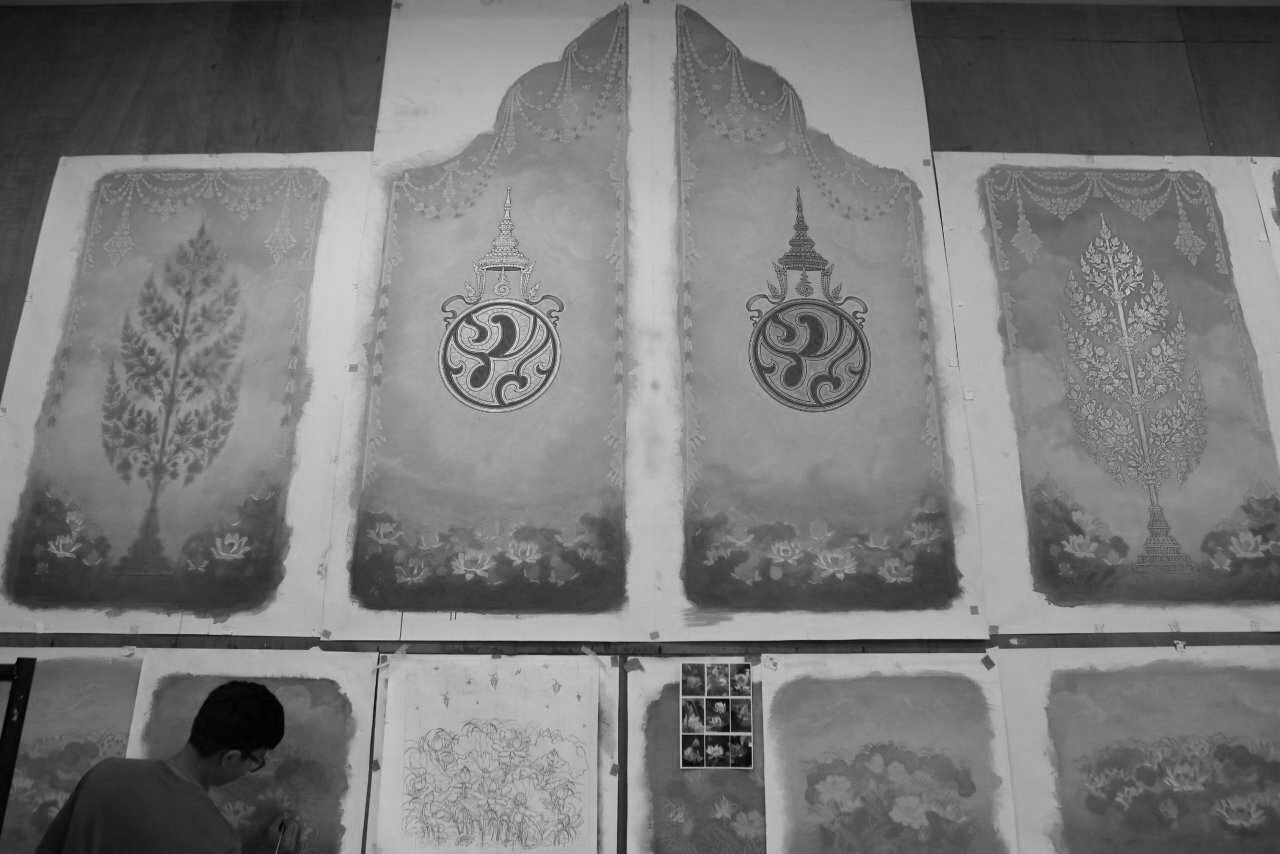 THE ELABORATE Royal Cremation panels or “Chak Bang Phloeng” will be the closest structures to the royal remains in the Royal Crematorium.

The cremation panels comprise folding screens in pairs – two on each side in the four directions connected at the poles of the crematorium. When in use, the screen is |extended to shield the funeral pyre. The panel on each side is 4.5 meters high and five meters wide, to suit the largest Royal Crematorium. They were set up on the site last week.

The design of the cremation panels at the Royal Crematorium of His Majesty the late King Bhumibol Adulyadej is well rounded, following tradition as well as befitting the great King. The murals are designed by artists, Montien Chusuehueng and Kiattisak Suwannaphong, of the Office of Ten Divisions of Traditional Thai Crafts in the Fine Arts Department.

Kiattisak explained that paintings featuring the top panels are eight scenes from the lives of the Vedic god Vishnu or Narayana, pointing to the late monarch’s divine status, while those on the bottom refer to royally initiated projects.

“The facial expressions of both Narayana and the celestials are calm and tranquil as if they’re deep in meditation,” he says. “According to ancient belief, they will come to attend the Royal Cremation and will escort His Majesty to Heaven.”

The remarkable west panel has had something of a royal blessing: Her Royal Highness Princess Maha Chakri Sirindhorn decorated the central jewels on the god Narayana’s headdress with the nine auspicious colors. The artists have finished the multi-hued dresses of the goddesses and angels, filling in their jewelry with gold leaf.

The cremation is viewed as the King’s return to the realm of the gods, and these murals employ what’s been termed the “King Rama IX style of art” with, for example, a distinctive way of depicting musculature.

“The artistic style is inspired by the mural painting of Phra Buddha Rattana Sathan Chapel in the Grand Palace in 1993. At that time His Majesty paid great attention to every detail and gave the painters advice, so we came up with the style that pleased His Majesty,” he adds.

The murals are double-sided. On the reverse side are gorgeous lotuses in bloom, monthathip flowers arranged in the feunguba pattern, and the late King’s monogram. The scenes are beautiful in pink and yellow gold. Yellow represents the nation and pink was His Majesty’s favorite color. They bring to life depictions of creatures living in the lotus pond, such as Nile fish, dragonflies, grasshoppers, and butterflies.

The painting technique is on canvas using special acrylic pigments that lend a matte effect, and use gold leaf on embroidered cloth and some accessories.

Former prime minister Chuan Leekpai, a talented artist, has spent months voluntarily painting panels for the staircases leading up to the main crematorium. In a tribute to Her Majesty the Queen, patron of traditional craftspeople, he has costumed celestials in garments of classic woven materials, bearing famous patterns from all four regions of Thailand. Source: Nation

BMA SET UP ALERT CENTER FOR HIGH-RISK CONTROL IN BANGKOK