Home » Prayut can only say ‘rescue as soon as possible’

Prime Minister Prayut Chan-o-cha said on Monday the eight footballers and their coach remaining in the Chiang Rai cave would be evacuated “as soon as possible”.

“Don’t ask in how many days or months they’ll be evacuated,” he told the press. “But we will do it as soon as possible, in the safest way.

“Nobody can tell how much time will be needed for the rescue mission.”

Prayut said he could not be directly involved in the rescue operation because the mission chief had to make the decisions after consulting all parties, including the boys’ families and foreign experts. 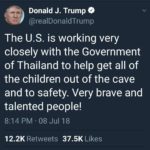