Pattaya Beach Vendors: Beach vendors were called on the carpet over their continued refusal to follow regulations on smoking and cleanliness.

Deputy Mayor Vichien Pongpanit presided over a Sept. 19 meeting at Pattaya School No. 8 where beach chair and umbrella vendors were told that they failed a recent inspection.

City officials found buckets of sand doubling as ash trays stored beside chairs and umbrellas at the end of the day, indicating vendors were allowing people to smoke on the sand instead of going to one of a dozen designated smoking areas.

City officials told the vendors to clean up their act, literally, or face heavy fines or revocation of their licenses. 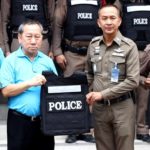