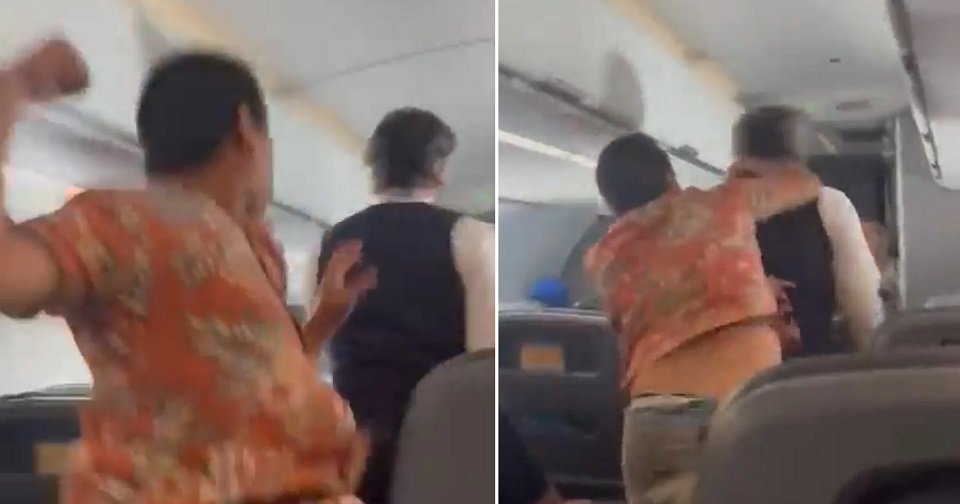 An American Airlines passenger brutally sucker punched a flight attendant in the back of the head after he was ‘refused a cup of coffee.’

The man dressed in an orange Hawaiian shirt sneaks up on the male attendant after they were said to have exchanged words in a tense encounter.

The attendant asks the violent traveller ‘are you threatening me?’ and as he turns around and walks to the front of the plane the man attacks him.

While his back is turned the suspect strikes him in the back of the head with a closed fist before trying to make a quick exit.

Holiday-goers on the Flight 377 from San Jose del Cabo to LAX on Wednesday were left stunned by the unprovoked attack.

The man is said to have tried to move to a seat near the first-class cabin, but when spoken to by staff he saw red and punched the attendant.

In a short video posted online by Barrie Livingstone, one passenger can be heard gasping and shouts ‘Oh my God’ after the suspect lands the underhanded blow.

The suspect – said to be 33-year-old Alexander Tung Cuu Lee of Westminster – was then detained by other passengers and removed from the plane when it touched down.

He was detained on suspicion of interfering with a flight crew.

If found guilty of the offense, Lee – who allegedly threatened the male attendant before the filmed attack – could face up to 20 years in prison.

A producer for KFMB-TV, Malik Earnest, who was aboard the flight said passengers sprung into action to help restrain the suspect until the plane landed and he was removed by police.

A separate video shows the airplane workers trying to put the suspect into restraints in his seat as gobsmacked passengers look on.

The suspect was then led off the plane by Los Angeles Airport Police once the plane landed.

In a statement, American Airlines said that the passenger who ‘physically assaulted a flight attendant’ will not be welcomed on their planes again in the future.

Spokesperson Derek Walls said: ‘’Acts of violence against our team members are not tolerated by American Airlines,

‘The individual involved in this incident will never be allowed to travel with us in the future, and we will work closely with law enforcement in their investigation.’

Jack Grealish was at party where ‘two women were raped’ 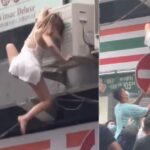 Women in Hong Kong runs from police is Thai man, 30