This was the unfortunate moment a driver was clipped by an oncoming songthaew – before spinning out-of-control into a moped rider.

The mother-of-one was driving on Tuesday afternoon at 4pm with her family in Samut Prakan Province.

Moments later the vehicle clipped the bumper of the 4×4 which spun to the right and hit a moped rider – sending her flying into a two bins at the side of the ride.

The shaken female driver said: ”I feel sorry for the lady riding the motorcycle. There was nothing I could do to stop from hitting her.

”The approaching minibus van hit the starboard side of my car. This caused it to swerve and the left side of the bumper knocked the motorcyclist into the electricity post and bins.”

The injured motorcyclist was taken to hospital to be treated for minor injuries.

She claims the songthaew driver left the scene quickly afterwards instead of staying to deal with any questions about the crash.

She added: ”To the minibus driver I would like to say this. If you so confident that you did nothing wrong, why did you leave quickly and leave your car and passengers behind?” 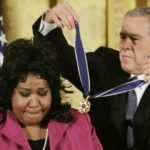 Aretha Franklin, the Queen of Soul, has died