Although Thailand’s Miss Universe contestant did not snag the crown Monday morning in Las Vegas, her final-round answer about social movements sparked debate back home.

Although 25-year-old Maria Poonlertlarp Ehren did not become Thailand’s third Miss Universe to the disappointment of some, she was applauded for going further than any Thai contestant in three decades by reaching the final five.

“Maria missed the chance with her answer,” @Noppatjak tweeted in English. “‘Ageing society and youth movement’ probably isn’t the top list of judges mind when it comes to ‘Social movement.’  Hope lesson will be learned for Thailand, global topic when it comes to world stage.”

It was far along after Maria had been selected the final of five women vying for the crown that she was asked to name “the most important social movement of your generation” and explain why.

While many felt she’d missed the mark, the conversation on Twitter and Facebook quickly turned to what, then, were the most pressing social movements.

Kavindhra Tiamsai’s widely shared post on Facebook commended Maria for her answer, but said that a better response should have addressed politics, gender equality, freedom of speech or “learning to embrace criticism with rationality.”

“I love Maria. I wish I could’ve warped into her brain and told her to answer ‘feminism,’” Watcharapong Noomglang wrote in a comment.

“If she was to answer really well, it would humiliate our government. You did well,” Jomtian Jansomrag wrote in contrast, then added in English, “How could Thai talk about social movements? Under the fake democracy like this.”

Thailand’s top trending tweets Monday morning were almost all about Maria and her advancement at the global pageant that aired 7am local time. #MariaCameFortheCrown, #I’llBeConfusedifSheDoesn’tGettheCrown and #MariaLynnEhren tweets had fanart and fan photos cheering her on. After South Africa’s Demi-Leigh Nel-Peters edged her out, Thais flooded the Twitterverse with encouraging comments with the hashtag #NoCrownButStillLoveYou.

Last year, Miss Universe Thailand, Chalita “Namtarn” Suansane was among the six semifinalists. She was asked to name “a current or past world leader whom you admire,” and responded in Thai to say His Majesty the late King Bhumibol.  Source: Khaosod 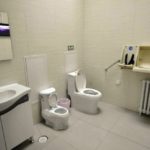 China’s ‘toilet revolution’ to march on