HANNIBAL Rising star Gaspard Ulliel has died after suffering a serious head injury in a horror skiing accident in the Alps.

The 37-year-old model and actor was rushed to hospital in a serious condition after the incident in the La Rosière ski resort in the Savoie region on Tuesday.

According to reports, the French actor was not wearing a helmet when he crashed into another skier at a crossing point on the slopes.

Ulliel, who shares a five-year-old son with model Gaëlle Piétri, was airlifted to a hospital in Grenoble following the horror collision.

The other skier was not seriously injured and an investigation is now under way into the tragic accident, the Savoie prosecutor’s office said.

Mountain cops have reportedly been responding to multiple accidents in the region in recent days due to hard snow and ice on the slopes. 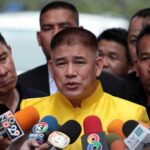